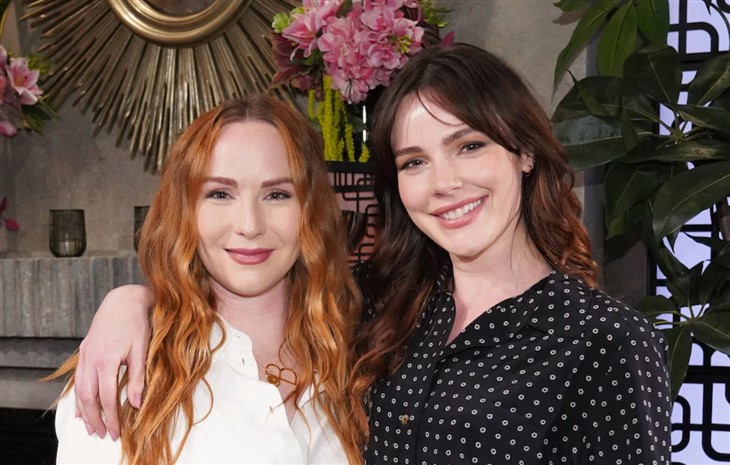 The Young and The Restless spoilers and updates tease that soon Mariah Copeland (Camryn Grimes) and Tessa Porter (Cait Fairbanks) will meet someone new. They are trying to adopt a baby and Christine Williams (Lauralee Bell) has found a birth mom, but they have to pass her test.

The Young And The Restless Spoilers – Previously Disappointed

Mariah and Tessa were previously disappointed when they met with a private adoption attorney who wouldn’t represent them. Both of them have previous criminal records and then there could be other issues as well that a potential birth mother would have problems with. But Christine agreed to take their case and she’s trying to work around all the possible hurdles.

She’s found a birth mom who wants to give up a baby, but she wants to get to know Mariah and Tessa first. It sounds like she cares about the baby she’s carrying, which could also present future problems but wants to make sure they’ll be good parents.

Mariah especially knows not to set her hopes high, and may caution Tessa as well so they won’t be setting themselves up for disappointment. A potential baby from a mother who cares who’s getting him or her sets up a red flag for her wanting her baby back eventually.

That is one thing that Mariah will likely make sure Christine checks out before even meeting with the young woman, because it was very tough giving up her little “Bowie”. Of course that is Dominic Newman-Abbott-Winters-Chancellor (Rainn and River Ware) and even now she steers clear from him to avoid problems. But it wasn’t always that way, it got a little ugly trying to help her detach and let go.

The Young And The Restless Spoilers – Strategy Meetings

That will be one issue that will be covered in strategy meetings ahead of getting the potential adoption ball rolling, although they don’t yet know the birth mom’s reasons. It could be a teenage pregnancy with the birth mother’s family unwilling or unable to help raise the child, or it could simply be that birth control failed. There are all kinds of reasons why a pregnant mom could want or need to give up a baby, including a marital or relationship breakup.

That reason could also bring future trouble since the baby’s father needs to have a say too. That would be another potential heartbreak for Mariah and Tessa on The Young and the Restless, so any issues will need to be ironed out ahead of the meeting, although they still face the mother’s tests.

Ada Nicodemou: Home and Away star on her career highlights including Heartbreak High and...

Emmerdale spoilers: Will Matty Barton EXPOSE the truth about Cain and Kyle?