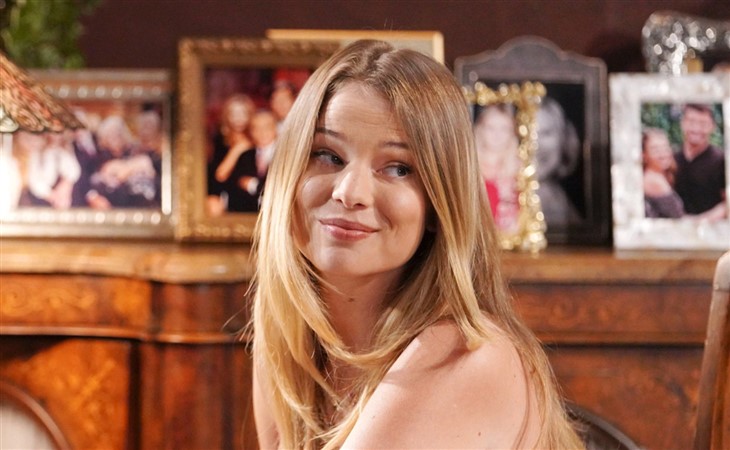 The Young And The Restless Spoilers – Sally Spectra’s Love Triangle

Y&R spoilers for the week of October 17 reveal that one must-see moment features Sally. Right now, Sally has moved on from Adam Newman (Mark Grossman). At least, that is what Sally wants everyone to think.

Inside, Sally is still drawn to and in love with Adam. When Sally is confronted by Nick Newman (Joshua Morrow) regarding her feelings for Adam, she will need to make a decision.

Sally and Summer have a lot of unpleasant history. Even though a lot of time has passed and Summer has tried to move on, things are different now. It was one thing when Sally was involved with Adam. However, for Sally to now be dating Summer’s dad, that presents some concern.

During the week of October 17, Summer will give Sally a warning. This warning probably has to do with Sally’s relationships with Adam and Nick.

The Young And The Restless – Tucker McCall Questioned

The Young and the Restless spoilers for the week of October 17 reveal that another must-see moment centers on Tucker. Nikki Newman (Melody Thomas Scott) and Phyllis Summers (Michelle Stafford) suspect Tucker and Diane Jenkins (Susan Walters) must have interacted sometime in Los Angeles.

Jack Abbott (Peter Bergman) will directly question Tucker about this. However, Tucker will tell Jack that he never crossed paths with Diane. Of course, Diane is rattled and doing what she can to smooth things over with Jack and Kyle Abbott (Michael Mealor), who will get suspicious.

Meanwhile, Nikki and Phyllis decide that Ashley has to manipulate Tucker. In their minds, it is the only way to get the truth out of Tucker.

During the week of October 17, Mariah and Tessa will turn to someone for guidance. This must have something to do with Tessa and Mariah’s plan to have a child. Their first attempt to go through a lawyer and adoption agency didn’t work out. So, maybe Tessa and Mariah will have better luck this time.

Share your thoughts on what could happen next with Tucker, Jack, Diane, Phyllis, Nikki and Ashley. What are your predictions for Adam, Sally, Nick, Kyle and Summer? Let us know what you think in the comments.

Be sure to catch up on everything happening with Y&R right now. Come back often for The Young and the Restless spoilers, news, and updates.

The Young And The Restless Spoilers: Jeremy Locates Diane, Does He Have Revenge In...

Home and Away to reveal huge secret over newcomer Tex