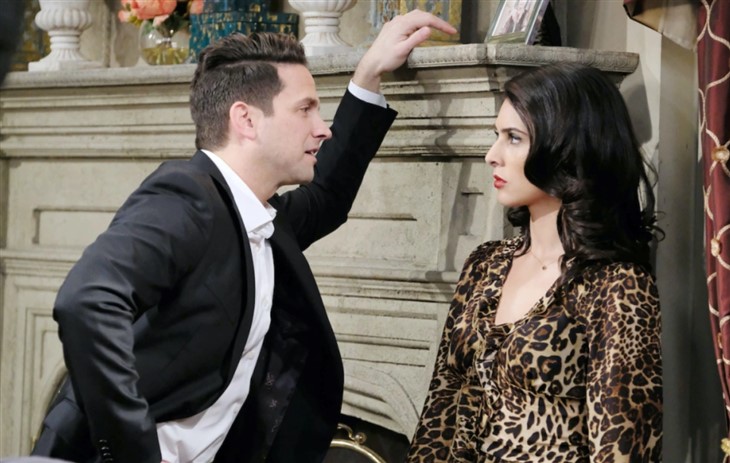 Days Of Our Lives spoilers and updates tease that Stefan DiMera (Brandon Barash) will serve Gabi Hernandez (Camila Banus) with divorce papers soon. Considering she believes she saw his memories of their great love “in there somewhere” can she be expected to put up a fight?

Days Of Our Lives Spoilers – Gabi Hernandez Could Refuse

Gabi could simply refuse to sign the divorce papers, but she’s in a tight spot to do so considering she’s engaged to DiMera board member Li Shin (Remington Hoffman). Li wants her to hurry up and get divorced so they can get married as soon as possible, although she doesn’t realize there are business reasons behind it. He recently admitted even though he claims to be in love, it’s likely more just a bad case of lust; he could drop Gabi like a hot potato easily.

That doesn’t sound like real love, that sounds more like manipulation; however, that is kind of how Gabi and Stefan’s “great love” started too. Gabi started seducing Stefan to get control of DiMera Enterprises but wound up falling for him and he for her.

Gabi thinks back to when she kept trying to “call” their love back to Stefan’s consciousness, knowing something changed in him at the time. She could see it in his eyes even though he huffed that he couldn’t stand her and she made him physically ill. Gabi refuses to give up, she knows that he cannot have remembered other things from the same time period, yet forgotten about them and their romance.

According to Days of Our Lives spoilers, Gabi highly suspects that someone has brainwashed Stefan when he came back to life, and she thinks she knows who, and knows why. There were all those times that her own fiancé was keeping secrets from her and all of a sudden his trips to Dr. Wilhelm Rolf’s (Richard Wharton) lab make sense.

Days Of Our Lives Spoilers – But Why Keep Stefan DiMera A Secret?

Gabi had just put down her ring at Stefan’s crypt when she found out he was alive, and so was her love for him in spite of accepting Li’s proposal. Why did he work with Rolf to bring Stefan back to life if he was so afraid he’d lose her to him, or is he afraid of losing the company too? Gabi buttonholes Stefan with all these realizations that Li was keeping his resurrection from her, that he could have been resurrected all along.

She fights signing the divorce papers and Stefan tells her he can get the divorce anyway, it will just take a little longer, that’s all. But before resigning herself to the marriage to Li when she knows Stefan’s memories of their own marriage are still there, she’ll soon ask Rolf some hard questions herself.

Be sure to catch up on everything happening with DOOL right now. Come back here often for Days of Our Lives spoilers, news, and updates.

Breaking The Cycle Of Abuse