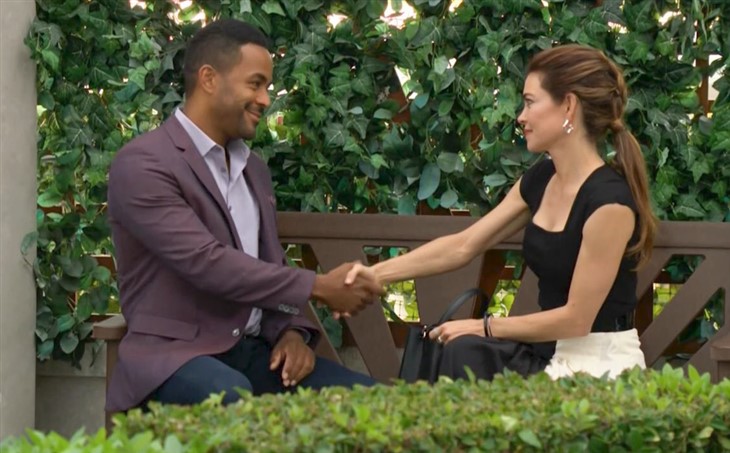 The Young and The Restless (Y&R) spoilers and updates tease that while Victoria Newman (Amelia Heinle) keeps her promise to Nate Hastings (Sean Dominic) Sally Spectra (Courtney Hope) may be a casualty. She could very well be following through with her threat to fire Sally in order  to replace her with Nate.

The Young And The Restless Spoilers – Sally Spectra On Job Probation

Sally is still on her ninety-day job probation because of a contract that makes her the interim CEO before she can be re-evaluated. At the end of the ninety days there would be a performance evaluation before Victoria could ethically fire her although she could for due cause. Due cause would have to be something particularly egregious, not just underperformance or missing a meeting.

However, Sally is coming close to the end of that ninety day period, and she promised Nate a job even though he blew her Chancellor-Winters takeover plot. Nate is Victor Newman’s (Eric Braeden) former personal physician and a longtime Newman family friend.

Nick is rooting for Sally to make it, and that is even before they became romantically involved. Both Sally and Chloe Mitchell (Elizabeth Hendrickson) are on ninety day probation to make Newman Media work, and so far they’ve been succeeding. But Victoria could get really nitpicky if she wanted to and try to override Nick’s input. Victoria made a huge deal out of Sally missing that important marketing summit because she had the time wrong-or at least that was the story. Victoria has been pushing for Sally’s failure all along, especially when she was still involved with Adam Newman (Mark Grossman).

The Young And The Restless Spoilers – Timing Is Convenient

The timing would be very convenient for Victoria to fire Sally to make room for Nate – although there would be Chloe to consider also. Nate doesn’t have the experience that Sally has but Victoria believes in him, unlike her opinion of Sally. She’ll go after Sally during the week of October 24, possibly to fire her, which would make room for Nate; and Victoria could arrange things where it would be impossible.

Victoria could easily push Sally to the point where she’d be setting her up to fail no matter what she did. But what will she do about Chloe – would she expect her and Nate to work together, or would she set her up to fail as well?

Be sure to catch up on everything happening with Y & R right now. Come back here often for The Young and The Restless spoilers, news, and updates.

Home and Away spoilers WHO tries to intimidate Remi Carter?