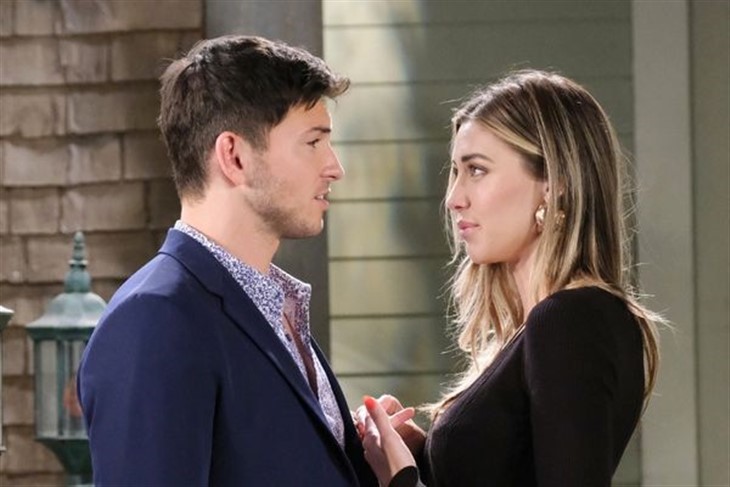 Days of Our Lives spoilers indicate that Alex Kiriakis (Robert Scott Wilson) and Sloane Petersen (Jessica Serfaty) have had a few encounters since his arrival. However, it seems that secrets and lies could keep them from striking up a true romance. Is this couple already doomed?

Days Of Our Lives Spoilers – Alex Kiriakis Is Ready For Love

Days Of Our Lives spoilers reveal that Alex is ready and willing to be in a loving relationship with someone he respects. Of course, Alex believed he was truly in love with Stephanie Johnson (Abigail Klein) until he saw her with Chad Dimera (Billy Flynn) celebrating his first day of work. Alex misunderstood and made a complete jerk of himself in the process.

Alex has been a major playboy for years and Stephanie just is not his type. However, Sloane is about as underhanded as can be and could be too big of a shark for Alex. Sloane is also trying to shake down one of Alex’s only friends in town. Is Alex setting himself up for a huge fall when it comes to Sloane? Can Sloane appease Alex’s appetite when he really wants Stephanie?

DOOL Spoilers – Can Alex Kiriakis Give Up On Stephanie Johnson?

Alex claims that he has given up on Stephanie but that likely isn’t the case. Stephanie certainly seemed to be hurt by Alex’s words when he confronted her and Chad at her apartment. Stephanie feels drawn to both men. However, Stephanie was very upset when she saw what Alex did to his brother. Stephanie had no idea that Victor Kiriakis (John Aniston) had a hand in that transaction as well.

Days Of Our Lives Spoilers: Alex Kiriakis Won’t Be Happy With Sloane Petersen

Will Stephanie finally give Alex a chance when her mother is well? Stephanie seems to be a bit more bothered by Alex’s reaction than putting a halt on things with Chad. Should Alex cut his losses and get away from Sloane while he can?

Be sure to catch up on everything happening with DOOL right now. Come back here often for Days Of Our Lives spoilers, news, and updates.

A Rescue Mission And A Heated Run-In

Baby surprises for Ziggy and Marilyn in Home and Away

Home and Away ties up two loose ends after cast exits

Days of Our Lives’ Carson Boatman: Who Is He Married To? Wife Julana