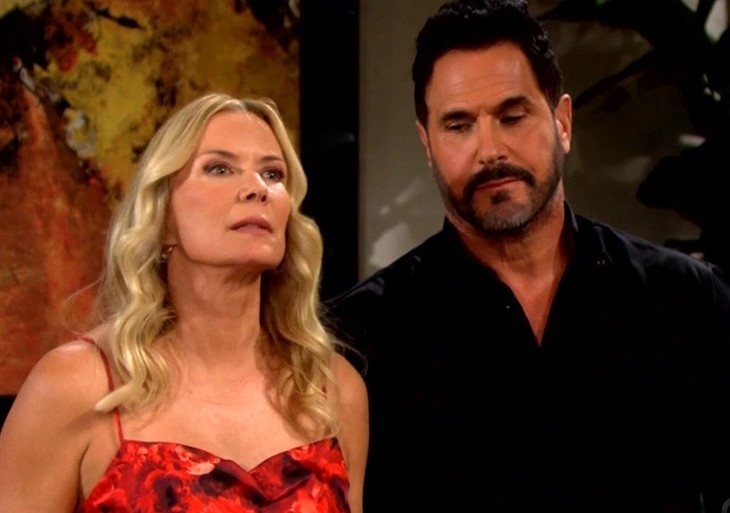 The Bold and the Beautiful (B&B) spoilers for October 17-21, 2022, reveal Bill deciding he wants Brooke back and Carter dropping a bomb on Katie.

The Bold And The Beautiful Spoilers – Fickle Men

Sure, it was just last week when Dollar Bill Spencer (Don Diamont) was begging Katie Logan (Heather Tom) for another chance but she point-blank asked him what he would do if Brooke Logan Forrester (Katherine Kelly Lang) were available again. He had no answer until he heard it through the grapevine that Brooke was indeed available again and he rushed right to her door.

Now, he has to stake his claim so he goes to see Deacon Sharpe (Sean Kanan) and tells him he has to stay away from Brooke. She may have been dumped by Ridge Forrester (Thorsten Kaye) but that doesn’t mean that Deacon gets to move in on her now. This is interesting information for Deacon but he has other things to concern himself with — namely the fact that he is still hiding Sheila Carter (Kimberlin Brown) and he does not want to go back to jail.

After that visit from Nikki Newman (Melody Thomas Scott), Deacon’s life is becoming much too complicated for his own tastes at the moment.

B&B Spoilers – Quinn Fuller Did What?

Weren’t Quinn Fuller (Rena Sofer) and Carter Walton (Lawrence Saint-Victor) so happy just a few months ago? They’d finally overcome obstacles to be together and there was a requisite interrupted wedding with a bike ride down the Santa Monica pier. Well, they are not happy any more since Carter tells Katie that Quinn just up and left him and he doesn’t know why.

Carter finally decides to turn to Shauna Fulton (Denise Richards) for some answers about her friend, but something tells us that Shauna has been sworn to secrecy and we won’t know anything until the writers figure out where Quinn went themselves. It’s likely they haven’t gotten that far now.

However, this news prompts Katie to go for broke and kiss Carter. Hey, he’s single again, she is lonely and knows she will never be back with Bill, and Carter falls in love so easily that it seems this is the pair B&B will go with now. We still will miss Quarter and wonder why it had to end this way. Stay tuned to The Bold and the Beautiful weekdays to see how these stories play out.

Days of Our Lives: Chad Sleeping With Gwen Could Be Just What He Needs...