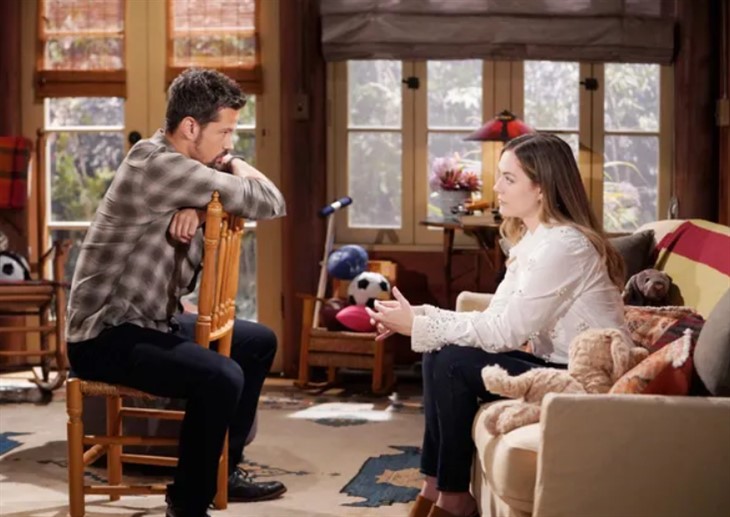 The Bold And The Beautiful spoilers indicate that Thomas Forrester (Matthew Atkinson) may currently be on top of the world but his world is about to crash. Hope Spencer (Annika Noelle) is furious that Ridge Forrester (Thorsten Kaye) broke up with Brooke Logan (Katherine Kelly Lang). However, Douglas Forrester (Henry Joseph Samiri) may blow the whistle on his dad about the CPS call. What will Hope do then?

The Bold and The Beautiful spoilers suggest that Thomas’s voice app is about to come back to haunt him. Every time Thomas hears Douglas playing with that app he throws a fit. Suddenly, last week fans learned why. After Douglas showed Thomas how the app worked, he used it to call CPS. Thomas also told the CPS worker that he was Brooke.

Unfortunately, Thomas hasn’t removed this from his phone which he often leaves lying around. Just imagine if Douglas finds the messages on the phone. Why would Thomas have Brooke’s voice on his phone? How would Thomas get his hands on a confidential phone call? Douglas may be curious and listen to the message before playing it for his mother. What would Hope do?

Hope was very upset over CPS being sent to the home to question her son. Hope was very concerned that Douglas would feel unsafe and even scared by the visit. If Hope speaks to Douglas and he indicates he was afraid, finding out that Thomas did this would be the last straw. Hope has given Thomas every chance in the world to be a good father. However, good fathers don’t behave like this.

Thomas has also attacked Hope’s mother. Hope knows that Thomas wants his parents back together but this is taking it way too far. Brooke loves Thomas and was concerned about him. Thomas’ calling CPS would do nothing but prove Brooke right. Will Hope cut Thomas off from Douglas for good? Will Ridge and Eric Forrester (John McCook) not support her decision?

The Bold And The Beautiful Spoilers – Will Thomas Forrester Remarry Hope Spencer?

Liam Spencer (Scott Clifton) has suspected what Thomas has been up to for a while. Will Hope’s tendency to stay at the Forresters lead to an affair between Brooke and Liam pushing Hope into Thomas’ arms before she learns the truth? If Thomas can get Hope to remarry him, she’s not likely to break up with him if Liam cheats. Thomas could pull off this big reunion that he’s been trying for.

However, Hope may realize that if Thomas will go to these extremes he is too dangerous to be around Douglas. After all, Thomas has used Douglas to get to her before, will Hope fall for Thomas’ tricks again? Will Hope get her son away from Thomas while she still has time? Thomas isn’t stable enough to raise a child if he can call CPS on himself. Thomas certainly doesn’t need to be around a child.

Be sure to catch up on everything happening with B&B right now. Come back here often for The Bold And The Beautiful spoilers, news, and updates.