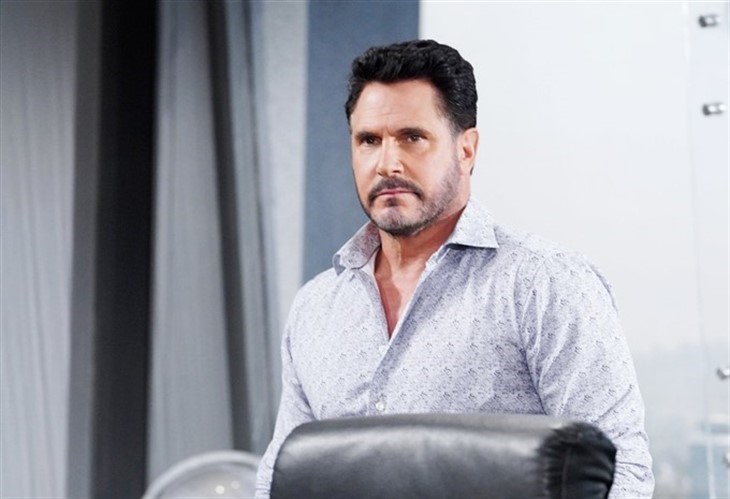 The Bold and The Beautiful (B&B) spoilers and updates tease in this week’s Soap Opera Digest that Bill Spencer (Don Diamont) and Deacon Sharpe (Sean Kanan) will clash. Katie Logan (Heather Tom) has moved on from Bill and now that Brooke Forrester (Katherine Kelly Lang) seems available, Bill wants to make sure Deacon won’t make a play for her.

The Bold And The Beautiful Spoilers – Deacon Sharpe-A Threat?

Bill views Deacon as a very real threat to his making inroads with Brooke, even though Bill will never admit his interest in her is more than as a good friend. He knows that as the father of her daughter Hope Logan Spencer (Annika Noelle) Brooke seems to have a soft spot towards Deacon, and a certain vulnerability. Bill’s opinion of Deacon is very close to that of Ridge Forrester’s (Thorsten Kaye) in that he doesn’t trust him whatsoever, that he is no more than a con man.

Worse yet, Bill thinks Deacon is only out for himself and that he will never change, and not only is he a bad guy, he’s a dumb bad guy. He thinks that Deacon will make a play for Brooke as soon as he finds out Ridge is out of the way.

Bill acts like he wants Brooke for himself and he wants to make sure that Deacon doesn’t come after her first. His spy, Othello (Othello Clark) called him and told him that Brooke and Ridge looked like there was a breakup because they came to Aspen separately and she was crying. Ridge had remained there with Taylor Hayes (Krista Allen) and Steffy Forrester Finnegan (Jacqueline Macinnes Wood) while Brooke took the Forrester jet home. Bill went right over to Brooke’s house and offered his shoulder to cry on literally, which she did, telling her he’d always be there for her. He might claim that he doesn’t view Deacon as a rival for Brooke’s affections, but it sure doesn’t seem that way.

The Bold And The Beautiful Spoilers – The Big Clash

The clash between Bill and Deacon, which takes place at Deacon’s apartment, becomes so heated that even Sheila Carter (Kimberlin Brown) gets nervous. Of course, some of her nervousness is about being detected by Bill, but she manages to hide herself, which is of course to her advantage. Don Diamont claims in the Soap Opera Digest article that Bill’s preoccupation with Brooke’s welfare is not romantic, but he thinks that Deacon is trouble.

Bill knows that Deacon would make trouble for Brooke now that Ridge and she are broken up. And he knows that the last thing Brooke needs right now is trouble from Deacon.

Be sure to catch up on everything happening with B & B right now. Come back here often for The Bold and The Beautiful spoilers, news, and updates.

Days of Our Lives Peacock Recap: Is Clyde Abigail’s Killer?