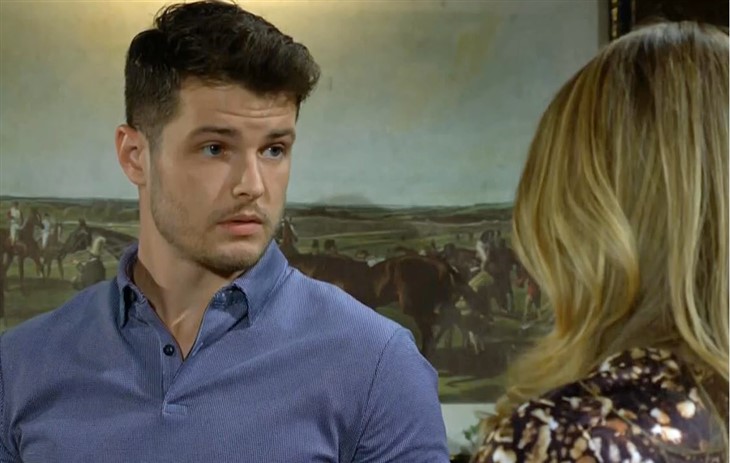 The Young and the Restless spoilers show that Kyle Abbott’s (Michael Mealor) “forever” prediction could spell the end of his marriage. Will Kyle’s fate comment end his relationship with Summer Newman-Abbott (Allison Lanier)?

Kyle is astounded by how well he and Summer coordinate their travel plans, however, there could be a bigger issue. Summer suggests having the nanny bring Harrison Abbott (Kellen Enriquez) down to Costa Rica so they can turn their honeymoon into a family fun beach vacation.

As a result, Kyle claims he was about to propose the same idea. However, the following section is truly disturbing – at least when viewed as a soapy foreshadowing of what’s to come.

Kyle discusses all of the breakups and makeups that led them here before concluding that once they made it permanent, they were doomed to last forever. Of course, the moment a soap character starts making “forever” comments, fans should be concerned! It’s usually a dead giveaway that something major is about to happen.

The Young And The Restless Spoilers – Is Their Marriage Doomed?

Kyle and Summer’s marriage is undeniably strong right now, but that’s the kind of remark that could lead to a temporary split or even divorce. It’s unusual for a soap marriage to last, but it’s especially unusual when a character goes around tempting fate like that.

Kyle is practically daring the universe to stymie him and put his relationship with Summer to the test. The universe is going to deliver, so we have to believe Diane Jenkins (Susan Walters) will play a role in Summer and Kyle’s impending conflict.

This is especially true given Diane’s connection to Tucker McCall (Trevor St. John), and keeping secrets is always a recipe for disaster.

The more specific issue for Summer and Kyle, however, maybe Harrison. This could turn into a fight over whether Diane still has a place in Harrison’s life. If Kyle is more compassionate than Summer when it comes to Diane’s mistake, it could spark a war.

As things progress, there is always the possibility of new love interests and betrayals. It’ll be interesting to see how far downhill the show allows “Skyle,” but Kyle’s “forever” comment is the first sign of trouble.

What do you think? Are you a fan of Kyle and Summer and is there a possibility that there could be trouble on the horizon between these two? Share your thoughts and remember to keep watching the CBS soap to see what happens next.

Is Sarah No Longer Periodically Psychotic on Days of our Lives?

Days of Our Lives: How To Watch on Peacock; Was It Cancelled by NBC?