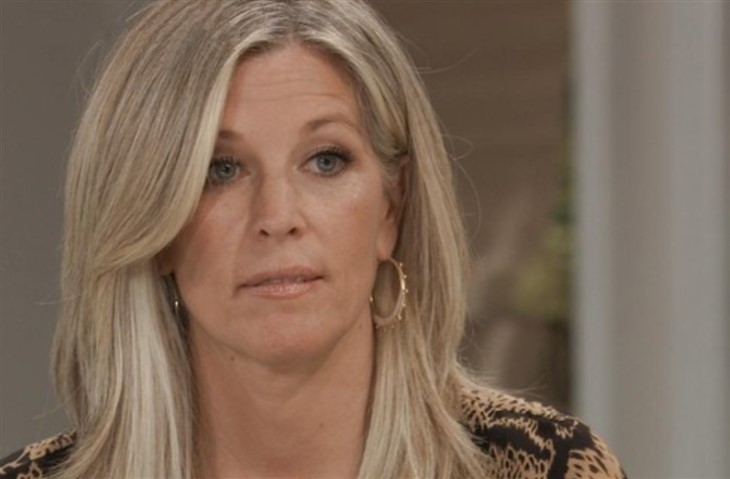 General Hospital spoilers tease that Carly Corinthos (Laura Wright) has been divorced from Sonny Corinthos (Maurice Bernard) for several months now. Carly didn’t think about it at the time but she decided she should no longer use the surname Corinthos. She’s not a member of that family anymore but she hasn’t yet decided what name she should take. There are a couple of options that seem the most likely: Spencer and Morgan!

Carly would certainly consider using her mother, Bobbi Spencer’s (Jacklyn Zeman) last name. Although Bobbi put Carly up for adoption right after Carly was born, Carly discovered the Spencer Clan when she came to Port Charles, she wanted revenge against Bobbi for giving her up. Carly and Bobbi remained adversarial for a very long time.

Today Carly and Bobbi are as close as in any other daughter/mother relationship. Luke Spencer (Anthony Geary) was Carly’s uncle and while the two of them may not have ever really liked one another, there was always strong mutual respect. But does Carly feel like a Spencer in her heart?

GH Spoilers – Carly Corinthos Considers Using The Name Morgan While On The Air!

The is only one person left who Carly had such a relationship with that she would even consider taking their last name. As General Hospital viewers know, Jason Morgan (Steve Burton) has been missing and presumed dead for several months now. Jason was Carly’s rock and he never hesitated to be there whenever Carly needed his support and friendship no matter the distance between them. Iason also was born with a different last name, but a brain injury erased Jason Quartermaine’s name from Jason/s memory. Jason chose the name Morgan for his new life.

Carly has all of her memories from her life as a Corinthos. But Carly certainly is in the process of re-inventing herself. Carly’s recent plane trip to Barbados had to be rerouted to her hometown of Jacksonville, Florida. Once there Carly butted heads with some old enemies and made it her mission to ensure that her adoptive mother’s grave and every other grave in her cemetery remain where they are, current plans are for them all to be moved.

General Hospital spoilers show Carly is also considering a possible relationship with Jason’s twin brother, Drew Cain (Cameron Mathison). Drew has been encouraging Carly to once again embrace life. Even though Spencer seems like the obvious and safest choice, Carly will likely choose Morgan as a way of honoring Jason’s memory.

What do you think?

Is Carly serious about dropping the name Corinthos? Will she be torn between Spencer and Morgan? Will Carly Morgan embark on a torrid affair with Drew? Anything can happen in Port Charles so stay tuned to General Hospital airing weekdays on ABC. And don’t forget to check back right here regularly for all your General Hospital news, information, and spoilers!

Things Heat Up At The DiMera House DAYS Spoilers