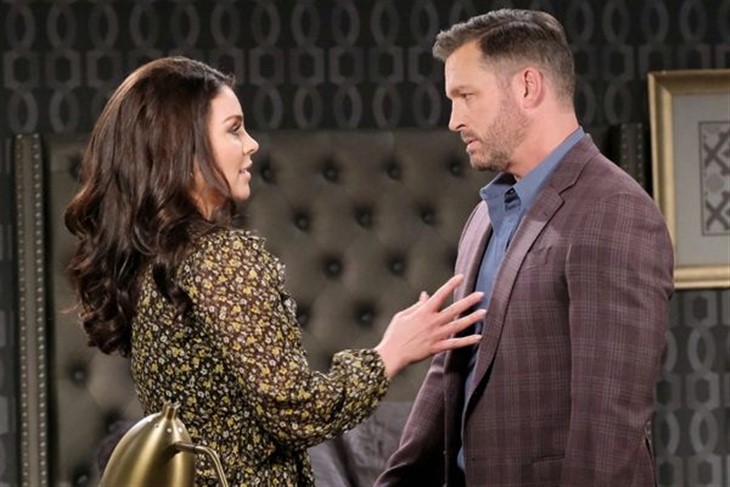 Days of Our Lives spoilers and updates tease in this week’s Soap Opera Digest that a desperate Brady Black (Eric Martsolf) will dump Chloe Lane (Nadia Bjorlin). Brady, at first unwillingly, made a deal with Kristen DiMera (Stacy Haiduk) to dump Chloe and reconcile with her in exchange for antidote to save Marlena Evans (Deidre Hall).

Days Of Our Lives Spoilers – Enough For Three

Kristen and Brady argued over her blackmail, with Kristen telling him she had the correct orchid that she said Dr. Wilhelm Rolf (Richard Wharton) had grown seedlings for. Still living in Jake DiMera’s (Brandon Barash) old apartment where she was caring for the plant, she would only show Brady a photo on her phone as proof. Brady said there needed to be antidote for three women; Marlena, Kate Roberts (Lauren Koslow) and Kayla Johnson (Mary Beth Evans) but she focused in on Marlena.

Brady finally gave in, and soon Detective Jada Hunter (Elia Cantu) rushed to Salem University Hospital with a vial of serum for Marlena that was delivered to the police station. In the meantime, Chloe shows up wanting to make a truce with Kristen, as Brady waits to break up with her until he sees if the serum works.

Rex Brady, (Kyle Lowder) with nothing left to lose, tries the serum on Marlena and it seems to work on her, and soon contacts Brady with the update. Chloe is there with him, and he kisses her and thanks her for standing by him, but unfortunately Kristen sees it. They do love each other but Brady has been forced into a deal and the others have not yet been treated, and all three would need multiple doses of the antidote. Chloe has not been able to convince Kristen of a truce and all of a sudden, it would seem, Brady does an unfathomable 180 degree turn and dumps her. This happens after Brady and Kristen have words and he’s just carrying out his part of the deal with Kristen, but Chloe knows nothing about it.

Needless to say, Chloe is blindsided and heartbroken, not understanding what is going on; it throws her into an absolute spiral. For weeks she had pushed him away over Rachel Black’s (Finley Rose Slater) hatred of her, and when she gives him her whole heart, he shatters it. Needless to say, it’s really over for Brady and him as far as Chloe is concerned because she’ll never trust him again.

He won’t explain what happened, and it’s just pandemonium and confusion for her, she has no clue what is going on. That’s probably because Brady knows Chloe would confront Kristen and he cannot take that risk with lives at stake.

Is Nikolas About To Finish The Job On Ava?

The Bold And The Beautiful Spoilers: Brooke Floats In Space – All is Not...