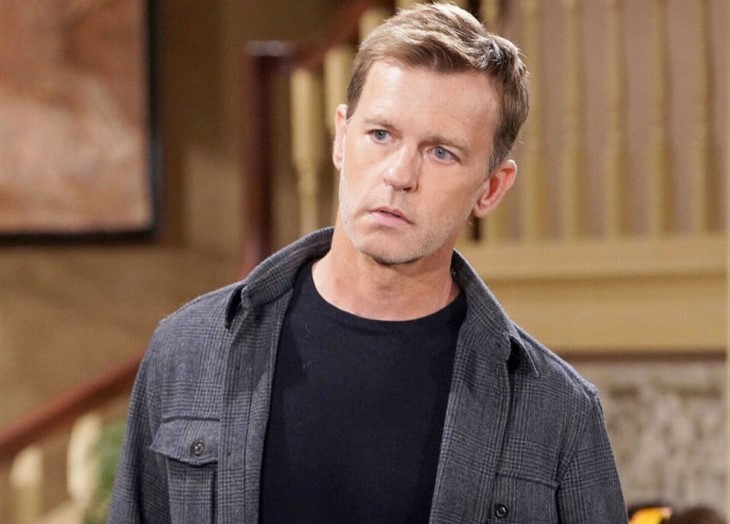 The Young and The Restless spoilers and rumors tease that some unexpected intel about Tucker McCall (Trevor St. John) will fall into the Newmans’ and Abbotts’ hands. Sally Spectra (Courtney Hope) will know something about Tucker from her Los Angeles days, and he has a connection to Spencer Publications and Dollar Bill Spencer (Don Diamont).

The Young And The Restless Spoilers – Media Connections In LA

There have already been suspicions that Tucker was behind the cancellation of Talia Morgan’s (Natalie Morales) exposé series on Diane Jenkins (Susan Walters) since he showed up in town. The two were in a relationship for a very short time in Genoa City but Nikki Newman (Melody Thomas Scott) brought back proof of a connection in Los Angeles. Deacon Sharpe (Sean Kanan) had seen Diane several times with a man in a Bentley riding around, although he didn’t know the man, which he wouldn’t have if he was Tucker.

Tucker and Deacon weren’t in Genoa City at the same time so Deacon wouldn’t have a reason to recognize him. Diane knows that Tucker got the exposé series cancelled, but no one else does so far.

But there is someone else in Genoa City who does recognize Tucker from Los Angeles, although Tucker doesn’t know her; Sally came to Genoa City for a new start from LA. When she first came to town and found out that the Newmans and Abbotts knew the Forresters and Spencers of Los Angeles, she was afraid her own past would be exposed.

Sally had been obsessively in love with one of Bill Spencer’s sons, Wyatt Spencer (Darin Brooks) and hurt very badly, and she made some mistakes. She was engaged to Wyatt twice, although she was afraid of Dollar Bill – he burned down her family’s business, Spectra Fashions so she went over to Forrester Creations. But she learned something about Spencer Publications when she was involved with Wyatt, and found out Bill had a silent partner – Tucker, and she saw him a few times.

The Young And The Restless Spoilers – Sally Spectra Spills The Tea

When Sally recognizes Tucker around town and finds out he’s made problems for the Newmans and the Abbotts in the past, she decides to spill the tea. She tells Nick Newman (Joshua Morrow) her knowledge of Tucker financing Spencer Publications way back when Bill burned down her family’s business, and knew that he’d been a silent partner. This contradicts Tucker’s narrative of not having been in Los Angeles during that time period and it’s helpful information for the Newmans.

Victor Newman (Eric Braeden) and Victoria Newman (Amelia Heinle) may not have found Sally useful before, but they thank her now. It’s a piece of missing information that they can use against Tucker, and seals her job with Newman Media.

Days of Our Lives. Another Disastrous Sami And Lucas Wedding