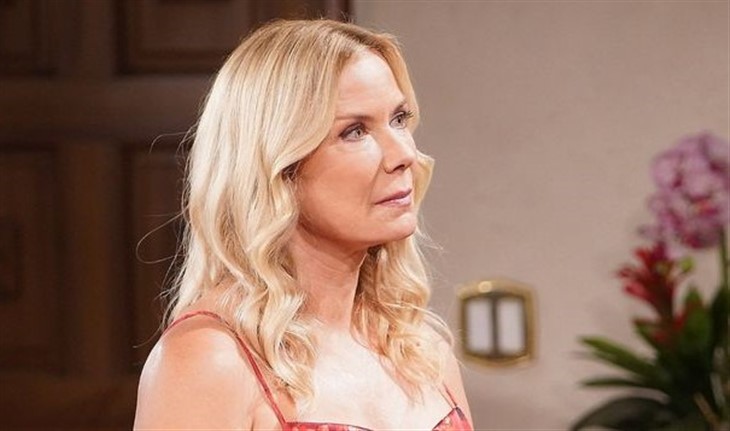 The Bold and the Beautiful (B&B) spoilers for Friday, October 14, 2022, reveal Brooke’s life at a crossroads now that Ridge has dumped her once again.

The Bold And The Beautiful Spoilers – The Bridge Will Always Break

While Ridge and Taylor Hayes (Krista Allen) revel in updating Thomas Forrester (Matthew Atkinson) and Steffy Forrester Finnegan (Jacqueline MacInnes Wood) on the state of their relationship, Brooke wonders what to do next now that she’s single again. There’s always Deacon Sharpe (Sean Kanan), who would take her back in a heartbeat if he was not so concerned with the trouble a presumed-dead Sheila Carter (Kimberlin Brown) would cause.

Then, there is Dollar Bill Spencer (Don Diamont), who has been her confidante of late and has been hanging out at her house a lot. Ridge doesn’t like either man but Ridge doesn’t count anymore, right?

Since Bill has been lonely and doesn’t think he stands a chance with Brooke at this point in their lives, his mind turns to Katie Logan (Heather Tom) again as he takes her to lunch and asks about their future. She has told him numerous times before that they have no future, but Bill is one persistent man when he gets an idea in his head.

Katie decides to take the idea of them being together out of Bill’s head by asking him if he would even be paying any attention to her at all if Brooke was available. Bill has to think about that one because Katie does have a good point.

And wait until they find out that Brooke really is available after all. Bill and Katie will both feel that Katie made the right decision. It looks like Brill is going to happen again but will Katie get her own story too? Hmmm….

Farewell to Neighbours: “I really wanted it to be a celebration of the past...

Days of Our Lives Recap: Leo Thinks He’s Being Framed For Sonny’s Stabbing and...