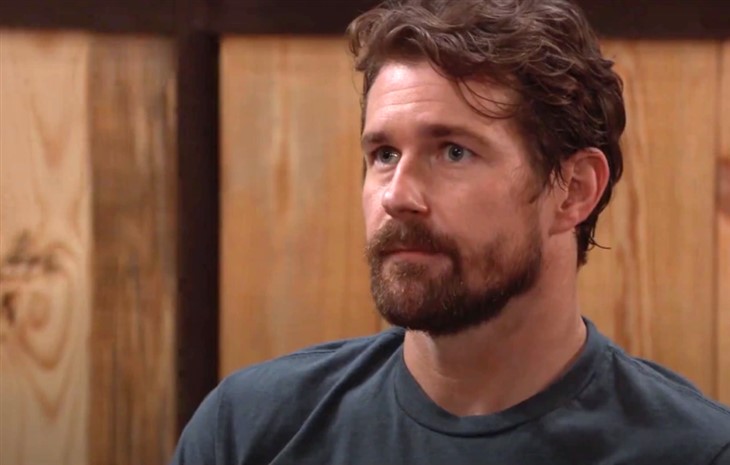 Britt Westbourne (Kelly Thiebaud) has come to Kelly’s looking for Cody after she found out from Maxie Jones (Kirsten Storms) that Mac Scorpio (John J. York) might be his father.

Perhaps when Cody finds out more about Britt’s relatives he won’t be so worried about his own. He thought his father was Leopold Taub (Chip Lucia) who was in a long ago cartel with hers, Cesar Faison (Anders Hove).

At the Metro Court restaurant, Mac and Felicia Scorpio (Kristina Wagner) update Scott Baldwin (Kin Shriner) on some things but they also have some questions for him. Scott looks a little bit blindsided as they talk about their mutual pasts with Dominique Stanton (Shell Kepler) Cody’s birth mother.

Felicia asks Scott if anything they said jogs his memory, while Mac asks him if he knows something they don’t. Perhaps there’s a good reason that Cody doesn’t want to take that DNA test with Mac to find out for sure if they are father and son.

Neither Mac nor Scott remembered Dominique saying anything to either of them about having a son.

At Anna’s house Lucy, not realizing that the very expensive diamond necklace she’s wearing contains a bug, confronts Anna over her interference.

Anna had called Lucy’s boyfriend, Martin Grey (Michael E. Knight) to come back to Port Charles, and he had walked in on Lucy and Victor Cassadine (Charles Shaughnessy).

Martin wasn’t wild about Lucy taking diamond jewelry from the Cassadine and Lucy shouts at Anna in desperation to get out of her way!

Lucy will be much more desperate when she finds out Victor’s playing her and she’s being tracked and listened to. She’ll be in some real danger not realizing what’s going on and why Anna took her off the “mission.”

Victor makes Valentin Cassadine (James Patrick Stuart) an offer, and Valentin is visibly upset when he tells him that he, Victor’s not the only one who’s holding back.

Now Valentin knows that Victor is onto him and Anna and their having had Lucy spy on Victor and Charlotte Cassadine’s (Amelie McClain) life is at risk. Charlotte has been Victor’s leverage against the continued investigation into Luke Spencer’s (Anthony Geary) murder, which they know Victor is involved with. Valentin will have to take some serious steps to try and rescue his daughter, which will bring worry to Anna in the days to come.

The drama in Jacksonville, Florida continues as Bobbie Spencer (Jacklyn Zeman) pays Drew Cain (Cameron Mathison) a visit in his hotel room. Bobbie has some nosy questions likely directed at him about his relationship with Carly Corinthos (Laura Wright).

Carly told her mother that she and Drew are just friends, but it doesn’t look like Bobbie believes it.

Drew asks Bobbie why he thinks she can answer that, but he’s got a mischievous grin on his face as he says it. Bobbie’s not going to fall for an answer like that.

Meanwhile, there’s more drama in Jacksonville as just after Bobbie left the hotel bar to go talk to Drew, Peyton Honeycutt (Linda Purl) showed up. She told Carly that her impassioned speech didn’t work, and her adoptive mother Virginia Benson’s (Lois Nettleton) grave would have to be moved.

They continue to argue as Carly says, “well, I do-did I leave anything out?” It sounds like Carly tells Miss Entitled Attitude exactly what she thinks of her and her fancy-schmancy beautification guild.

Finn Will React This Way to Steffy & Li Drama

Days of Our Lives Spoilers: Will Marlena, Kayla And Kate Bring Susan Back From...