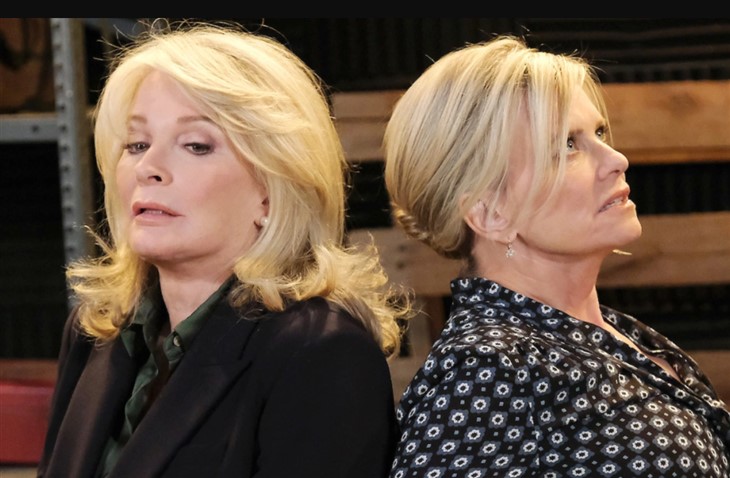 Days of Our Lives spoilers for Thursday, October 13, 2022, reveal a race against time to save three Salem ladies.

Marlena Evans (Deidre Hall) has been presumed dead or near death’s door so many times it’s hard to count, but this time she really does think the end might be nigh and she tells John Black (Drake Hogestyn) she is soon ready to say her goodbyes. Of course, John doesn’t want to hear any such thing from his precious Doc and he is still determined to save her and the other ladies.

Kate Roberts (Lauren Koslow) also feels this is it for her and Roman Brady (Josh Taylor) wants to make sure her last days are spent feeling happy and secure so he is ready to marry her. Will this give Kate the will to live or at least hang on long enough for Rex Brady (Kyle Lowder) to save his mom and Kayla Johnson (Mary Beth Evans) and Marlena?

Kayla is also barely hanging on but it turns out Stephanie Johnson (Abigail Klein) is too busy with a political campaign to care. At least Kayla’s son and stepson are on their way.

DOOL Spoilers – Does Kristen DiMera Hold The Key — Or The Flower?

Kristen DiMera (Stacy Haiduk) is sadistically reveling in all this death and dying because she knows she can save these women, but no way will she do it without something in return. She wants Brady Black (Eric Martsolf) back cause that obsession is sick and will never end but Brady is with Chloe Lane (Nadia Bjorlin) and doesn’t ever want to have anything to do with Kristen again.

In fact, Chloe has quite a shocking suggestion for Brady and he is not quite sure what to do with her idea. Do they want to trick Kristen into thinking she will get what she wants?

Even Dr. Wilhelm Rolf (Robert Wharton) thinks Kristen is out of her mind and for a mad scientist, that really is saying something. He warns her that she is playing with fire and her idea might not pan out the way she wants — for herself and for those poor dying women.

But Kristen rarely listens to anyone, so why would she want to start this time? Stream Days of Our Lives weekdays on Peacock by 6 am EST to see how these stories play out.

Elizabeth Rose has spent most of her long adult life writing about soaps off and on. She grew up on long-departed soaps Another World, Santa Barbara, All My Children, One Life to Live, and Guiding Light. Since college she has been a General Hospital lover and considers herself to be an encyclopedia of everything daytime.