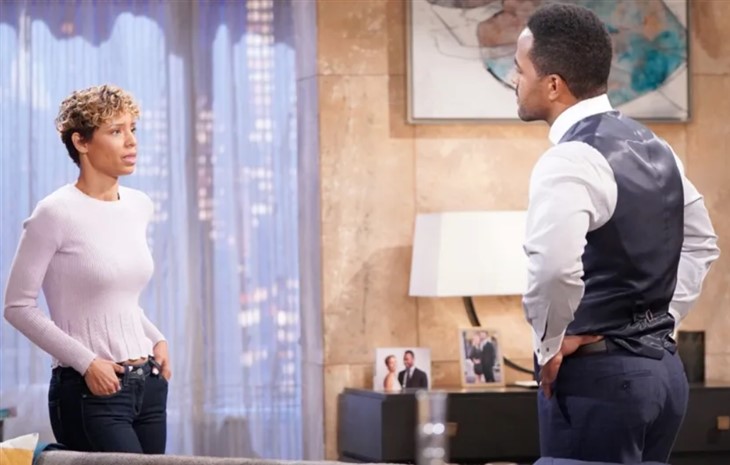 The Young and the Restless (Y&R) spoilers for Wednesday, October 12, 2022, reveal Elena and Billy both making major decisions.

Even with Nate Hastings (Sean Dominic) begging her to come back, Elena Dawson (Brytni Sarpy) knows resuming their relationship is not the right thing to do. After all, Nate has changed so much that she barely recognizes him at this point and she knows he is up to no good.

After an encounter with Victoria Newman (Amelia Heinle) at Crimson Lights, Elena knows she has to take the bull by the horns and do something daring to help make Nate see the light. Of course, she knows this will help Devon Hamilton (Bryton James) too and she might still have lingering feelings for the man she cheated on with Nate.

Speaking of Devon, Lily Winters (Christel Khalil) wants her brother to stick up to Nate even more. Yes, they are all family but Devon isn’t being aggressive enough, in Lily’s opinion. Something tells us this is going to backfire for everyone and the Chancellor-Winters initial public offering is going to be a bust. That won’t go well for Nate and Victoria’s little insider trading plot.

Things didn’t go well for Chelsea Lawson (Melissa Claire Egan) when she essentially stalked Johnny Abbott in the park and tried to force her way into his life without even notifying his parents what she was up to. Johnny was not happy with her at all and basically gave her the cold shoulder.

Billy Abbott (Jason Thompson) and Victoria are also not happy with Chelsea and Billy lets her know she can never do that again as she can hurt Johnny emotionally. It’s up to Johnny whether he wants to get to know his bio mom and not up to Chelsea.

Well, Chelsea just won’t take that lying down and gives Billy pushback. Chelsea is starting to once again unravel and Victoria can see it, but can Billy see it and if he does, will that cause Chelsea to unravel some more? That could end up being a very dangerous situation for Johnny….

Stay tuned to The Young and the Restless weekdays to see how these stories play out.

Days of Our Lives: Rachel Confronts Chloe Over Mommy