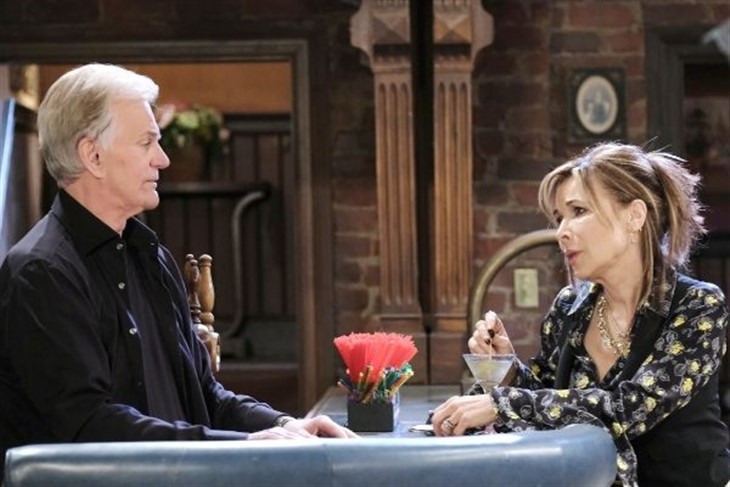 Days of Our Lives spoilers and updates tease Roman Brady (Josh Taylor) will make a deathbed marriage proposal to Kate Roberts (Lauren Koslow) who’s losing the battle. Kate, Kayla Johnson, (Mary Beth Evans) and Marlena Evans (Deidre Hall) are all failing at about the same rate from the deadly toxin Orpheus (George DelHoyo) exposed them to.

Days Of Our Lives Spoilers – Till Death Do Them Part

Till death do them part may come before they can even say the marriage vows, since the clock is ticking down for an antidote for the toxin. Rex Brady (Kyle Lowder) tried to get an antidote from Dr. Wilhelm Rolf (Richard Wharton) but Kristen DiMera (Stacy Haiduk) was pressuring Rolf not to provide one. That rare orchid that Rolf already has growing in his secret lab is her ace in the hole to manipulate Brady Black (Eric Martsolf) into reconciling with her.

That is the only way that Kristen can raise their daughter Rachel Black (Finley Rose Slater) is if she and Brady are together. He won’t allow her joint custody whatsoever, and she plans to blackmail him using the antidote to save his mother.

DOOL Spoilers – Cure For One, Cure For All

The cure for one would be the cure for all three women so there has to be enough antidote to save all three women. However, with time rapidly running out, Roman wants to make that special request of Kate so at least she’ll die knowing he loves her if death is inevitable.

So, with engagement ring in hand, Roman asks Kate to marry him on what very well may be her deathbed, hoping against hope they’ll be able to get married. Days of Our Lives spoilers show Kate of course says yes, and hangs on to the hope of a cure so they can plan their wedding and say their vows and live happily ever after. Roman tells her he’s willing to get married with her still awaiting a cure if it makes her happy, Eric Brady (Greg Vaughan) is right down the hall.

Right now the race for the altar and the race for the cure are pretty evenly matched; time is running out and everyone is hoping for a miracle. It may come down to a touch from an angel, but no one’s seen Angel Bo Brady (Peter Reckell) hanging around the hospital yet. Kate will think about getting married right away if they can have a real wedding later, when the three of them are cured.

Positive thinking and many prayers will help Kate and the others’ attitudes, to be sure. But whether the desired outcome will happen is a huge gamble at this point.