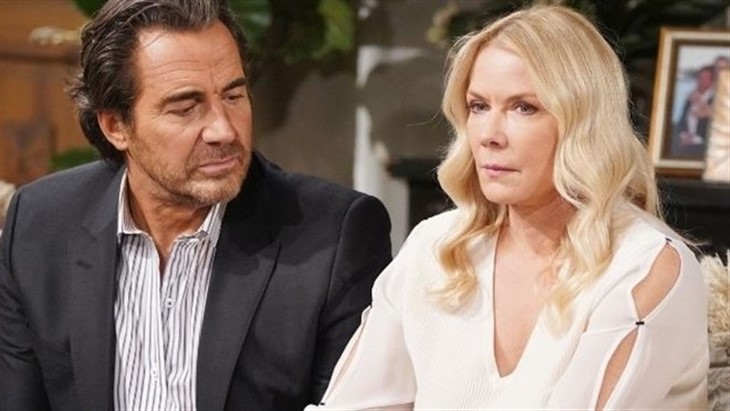 The Bold and the Beautiful spoilers reveal a clueless and stunned Brooke realizing she might not get her man back.

The Bold And The Beautiful Spoilers – Brooke Logan Is Determined

There are few more unself-aware and hypocritical characters on soaps than Brooke Logan Forrester (Katherine Kelly Lang), save for maybe Carly Who Needs A New Last Name (Laura Wright) over on General Hospital. When things don’t go their way, they can never imagine why.

Brooke is absolutely stunned when she learns that Ridge Forrester (Thorsten Kaye) took off to Aspen, which is exactly where Taylor Hayes (Krista Allen) is. He didn’t even bother to tell her he wasn’t coming home for dinner. She also has no idea it was somehow her voice that Ridge heard on the CPS tape.

Yes, Brooke has been through this before tons of times, so she feels all she has to do is be nice to Ridge and make sure he comes home like a good boy because she somehow believes her marriage is stronger than ever. That dream she had for the soap’s 35th anniversary really snowed her, didn’t it?

Imagine clueless Brooke’s shock when Ridge announces it is over between them, he is not coming home with her, and he is with Taylor now. Brooke thinks he has to be joking. Where is this even coming from? There is no way she is not going to fight for the man who ran off to Aspen to cheat on her. Pride is not something Brooke is strong on.

Curiously, Ridge still doesn’t tell Brooke about the CPS tape. Perhaps he doesn’t want Taylor to think that the only reason he ran to her is that he was once again angry at Brooke. That would surely cause Taylor to dump him just as quickly as she took him back. She doesn’t want to be second best and second choice just because Ridge is mad at Brooke again for some indiscretion or another.

To that end, a dejected Brooke gets back on the plan to head to LA but we are sure she won’t be giving up. After all, the truth — whatever the truth may be — is bound to come out about that CPS tape soon. And then Taylor will be back to square one.

Y&R Spoilers: Nick Goes To Battle For Sally Unaware Of Her Betrayal With Adam

Young & Restless Chelsea Wants To Get Together With Billy, Uses Johnny?

12 huge Home and Away spoilers for next week