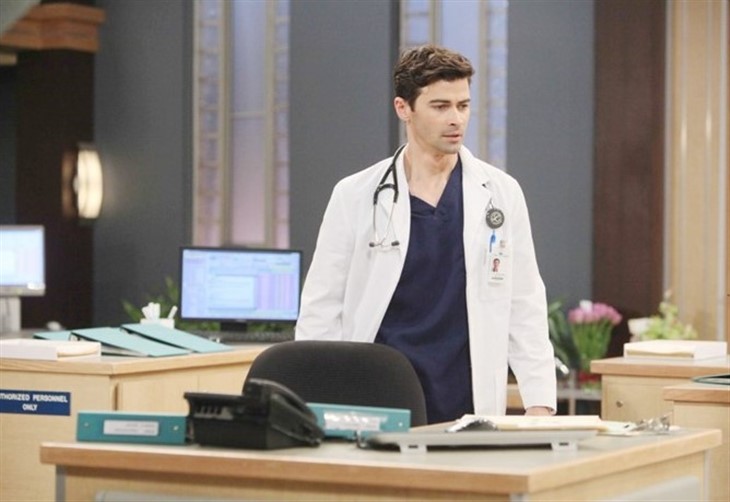 General Hospital fans, rejoice! Dr. Griffin Munro (Matt Cogen) has been spotted back on the GH set! No, he’s not just swinging by to visit old friends. The actor confirmed he is set to reprise his role of the handsome doctor in the near future. We’ve seen him twice already since his big exit after his girlfriend – Kiki Jerome’s (Hayley Erin) — death. Will he be returning to assist on a case, or might Griffin come calling for more personal reasons?

Griffin is a doctor. It’s possible he’s going to be called back to Port Charles on a medical case. GH may not have enough neurosurgeons on call. He could be a pivotal character in saving the life of someone who is attacked by The Hook. He might also come running because he heard Ava Jerome Cassadine (Maura West) — his former flame as well as Kiki’s mother — was attacked, though it’s been a few weeks already, so that may not be as likely.

Regardless of what it is that brings Griffin back to town, fans can rest assured it’s not going to make Nikolas Cassadine (Marcus Coloma) happy. There’s nothing that gets in the way of Nikolas and Ava’s happiness more than someone else vying for the affection of one of them — or holding any space in their memory as someone who once did.

Much like two teenagers who haven’t yet mastered the art of accepting that everyone has a past, Nik and Ava prefer to exist in a love bubble where no one has ever experienced love for either party like they do for one another. Will Griffin come along just in time to rekindle romantic feelings for Ava while she’s on the outs with her hubby? Can she just forget all about Nikolas? We don’t want to believe that, either!

General Hospital Spoilers — Griffin Monroe Might Be Back For Ava Jerome

When Griffin and Ava first fell in love, he brought out the best side of the Jerome girl from the wrong side of the tracks. Ava’s hard exterior softened, and we saw vulnerability in a character who feared weakness. Griffin helped Ava to mend so many wrongs in her life, and he helped her grow closer to her daughter, Kiki. However, Kiki and Ava ultimately left their relationship in shambles — and that was partly Griffin’s fault, too. Kiki and Griffin had grown closer and their friendship became more than that. When Ava discovered this, she felt betrayed and retaliation was her way of trying to heal. That said, she never imagined she would never have the chance to fix things with her daughter, whose life was taken too soon by psycho killer Ryan Chamberlain (Jon Lindstrom).

Last time we saw Griffin, he expressed how much he missed seeing Ava. Could her brush with death have made Griffin think twice about leaving her in his past? Might he be returning in hopes that her split with Nikolas is a new inroad for him back into Ava’s world? Tell us what you hope happens with Griffin’s big return, and don’t log off for too long; we’re posting more GH updates, news, and spoilers all day long.