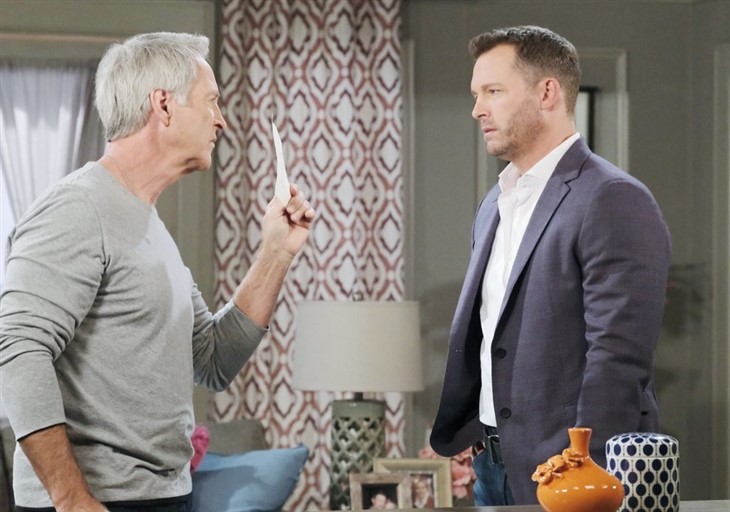 Days of Our Lives spoilers indicate that Brady Black (Eric Martsolf) will stop John Black (Drake Hogestyn) from making a grave mistake. What does John have in mind? Can Brady keep his father in check? Is John trying to get the orchid from Kristen Dimera (Stacy Haiduk)?

Days Of Our Lives spoilers reveal that John wants that orchid now. Once John finds out that Kristen has the orchid, he will be ready to strangle Kristen if need be to get it. Brady knows that if John goes after Kristen, she will destroy the orchid ending all hope of saving Marlena Evans (Deidre Hall), Kate Dimera (Lauren Koslow), and Kayla Johnson (Mary Beth Evans).

Kristen refuses to give the orchid to anyone to help save these lives. Kristen cares nothing about anyone but herself and her wants. Kristen wants Brady and that will be the only way that she will give up this orchid. Brady cannot allow his father to confront Kristen because she has the only hope of saving Marlena.

Brady’s mother passed away when he was very young on Days of Our Lives. Marlena has been the one who has been there with Brady throughout his life. Brady knows that Marlena loves him and he loves her as well. Brady is trying to ensure that they obtain the orchid to get this cure made. Brady cannot allow John to come between him and Kristen. Will Brady talk her out of the orchid?

Brady may have a meeting with Kristen planned that he doesn’t want John to ruin. Brady knows how much Marlena means to their family, especially his father. Brady is going to do everything he can to save Marlena and the other ladies as well. Can Brady keep John calm enough to get his hands on the orchid? Can Brady get it in time to save any of them?

Days Of Our Lives Spoilers – Brady Black Makes A Deal

Brady will make a deal with Kristen for the orchid. However, Brady isn’t about to let his father know what he has to give to do that. Kristen will no doubt demand full access to her daughter. Brady may also be forced to break up with Chloe Lane (Nadia Bjorlin). Kristen will no doubt force a romantic reunion with Brady and force him to stick with the agreement.

Can Brady protect Marlena from being infected again by staying with Kristen? Will Marlena and the others survive because of Brady’s huge sacrifice? Will John leave well enough alone before Kristen goes after Marlena again?

Bold and Beautiful. Questioned Intentions And A Stolen Moment