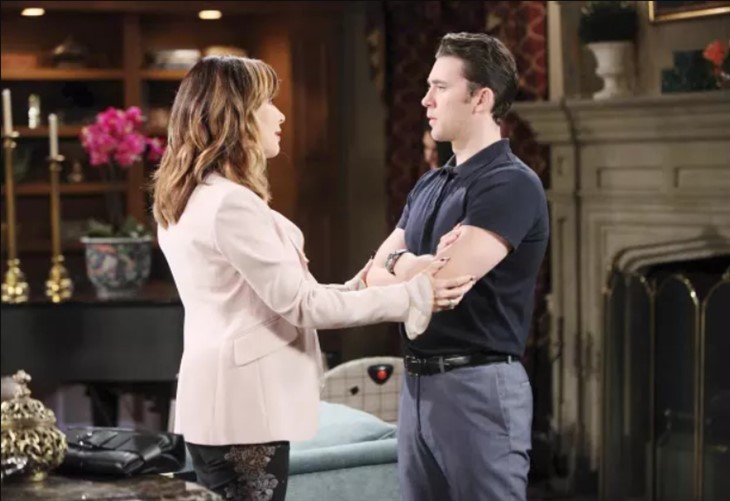 Days of Our Lives spoilers indicate that Chad Dimera (Billy Flynn) will visit a gravely ill Kate Dimera (Lauren Koslow). Chad has recently told Stephanie Johnson (Abigail Klein) how much Kate means to him. Kate took Chad under her wing after his mother died and has been a mother figure for him since he was a teenager.

Days Of Our Lives spoilers reveal that Kate and Chad have had their issues but the two of them are still very close. Chad has already lost his biological mother and isn’t prepared to lose Kate. Of course, Chad and Stephanie are both going through a similar situation now. Stephanie’s mother is sick from the same biotoxin. Will Kate and Kayla bring the two of them together?

Chad hopes that a cure can be found to save these women. However, Chad has no idea that Dr. Rolf (Richard Wharton) and Kristen Dimera (Stacy Haiduk) have the essential ingredient of the cure. Chad will certainly be furious with his sister for holding this orchid over everyone’s heads instead of helping to save these ladies’ lives. Will Kristen ever learn?

DOOL Spoilers – Kate Dimera Is Trying To Be Positive

Kate is trying to keep up a good front for everyone. Kate doesn’t want to admit how sick she is. Kate checked herself out of the hospital because she thought she would feel better at home. Roman Brady (Josh Taylor) has been trying to take care of Kate as best he can. Roman is also about to propose to Kate which should make her happy.

Will Chad be there with Rex Brady (Kyle Lowder) and Eric Brady (Greg Vaughan) when Roman proposes to Kate? Will Kate accept Roman’s proposal even though she may be dying? Roman wants to make Kate’s last hours as happy as he can. Will Kate and Roman be able to get through this and have a good life together?

Chad will be thrilled for Kate when Roman proposes. Chad will certainly have hope that Kate will pull through and have a life with Roman. Kate deserves happiness and Chad wants her to have a love like he had with Abby Dimera (Marci Miller). Chad will likely have a good visit with Kate but will leave very concerned. Does Chad sense the impending doom that everyone else feels?

Brady will finally give in to all of Kristen’s demands to get his hands on this orchid. Can Brady save all three women with his sacrifice?