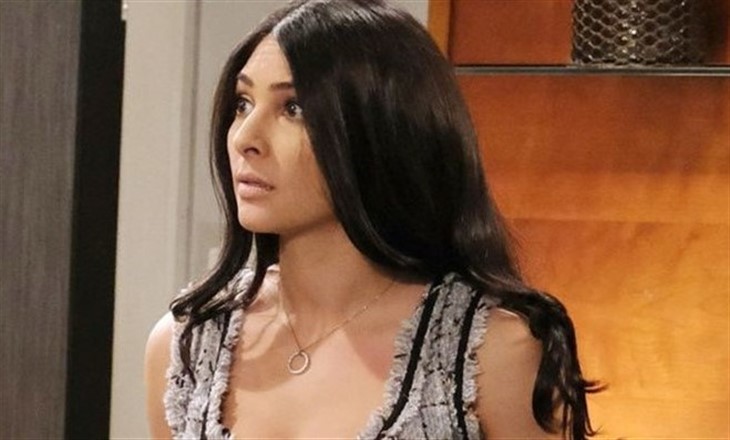 Days of Our Lives (DOOL) spoilers for Tuesday, October 11, 2022, reveal Gabi learning her life as a corporate raider may be coming to an end.

Days Of Our Lives Spoilers – Gabi’ Hernandez Been Foiled Again

Ever since Stefan O. DiMera (Brandon Barash) allegedly died in 2019, his widow, Gabi Hernandez (Camila Banus), has done her best to try to hold onto her power at DiMera Enterprises. The DiMeras have fought her, but she has also gotten herself involved with Jake DiMera (also Brandon Barash) and Li Shin (Remington Hoffman), two men with DiMera ties who kept her where she wanted to be.

Well, now Jake is dead, Stefan is alive again, and she is engaged to Li because Stefan has been brainwashed into not wanting her. And Gabi is about to get even more bad news when she learns that Ava Vitali (Tamara Braun) lied about being married to Jake before he died, so his DiMera shares now go to Vivian Alamain (last played by Linda Dano) and Vivian gifts them to Stefan, who is ready to oust her from the company.

Even Johnny DiMera (Carson Boatman) is furious about all this considering he trusted both Ava and EJ DiMera (Daniel Feuerriegel) and now he learns he can’t really trust anyone.

Well, that is until he meets Wendy Shin (Victoria Grace), who is now in Salem looking for Li’s help. She quickly catches Johnny’s eye and it’s clear that Sami Brady (Alison Sweeney) and EJ’s son can go from woman to woman with ease.

The last woman Johnny really thought he wanted was Chanel Dupree (Raven Bowens) and now Chanel’s past is coming back to haunt her. Paulina Price Carver (Jackee Harry) now knows that Sloan Peterson (Jessica Serfaty) has some info on Chanel that can ruin both Chanel’s life and her own gubernatorial campaign. Paulina gets together with Stephanie Johnson (Abigail Klein) to discuss this mess on Tuesday and see if Stephanie can help her.

Paulina doesn’t want to see Chanel go down for something horrible, but she also wants to know if it’s true — and save her own flailing political campaign.