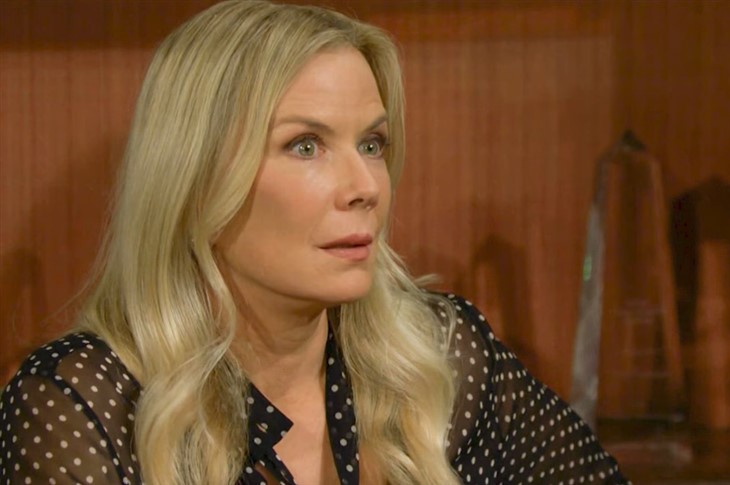 The Bold and the Beautiful (B&B) spoilers for Tuesday, October 11, 2022, reveal Brooke getting ready to fight for her man, but it just may be too late.

The Bold And The Beautiful Spoilers – Brooke Logan Had No Clue

When Brooke Logan Forrester (Katherine Kelly Lang) learned that Ridge Forrester (Thorsten Kaye) took off to Aspen, CO without even telling her, she knew she had to follow him, especially because Taylor Hayes (Krista Allen) was there. However, Brooke is not prepared for what she is about to hear.

Ridge is done with her. He wants to be with Taylor now and there is nothing Brooke can do to change that. Or at least that is what Ridge says. We all know Brooke has done plenty to change that in the past. While Ridge doesn’t let on about Brooke’s voice on the CPS recording, it is still too much for him and there is no way he can be with Brooke again after she allegedly did such a thing, so Taylor it is.

With Brooke not knowing about the recording, this all just comes out of left field for her. The fact that Ridge kissed Taylor in Monte Carlo apparently didn’t faze her. Neither did the entire year of she and Ridge being on the outs due to the New Year’s Eve Deacon Sharpe (Sean Kanan) incident. For some odd reason, Brooke thought her marriage was stronger than ever. So what if she detests Ridge’s son with the fire of a thousand suns. Why would that ever interfere with her destiny with Ridge?

Meanwhile, Steffy Forrester Finnegan (Jacqueline MacInnes Wood) is on cloud nine because it seems that her little parent trap plan worked just as she was about to give up. Taylor had given up and she hated seeing her mother in pain so she resolved to not see her folks together again but now her wish has come true — until Brooke shows up and threatens to turn everything upside down.

When Steffy realizes Brooke has shown up, she wants to have her say. However, she soon realizes she needs to let Ridge have his own say.

Bump at the beach! Pregnant Sam Frost cradles her stomach during a sunny day...

Days Of Our Lives Alum Mark Miller Passes Away

Y&R Spoilers: Mishael Morgan Explains Why She Went Off Contract

Did You Know We Almost Had Y&R’s Eric Braeden As James Bond?