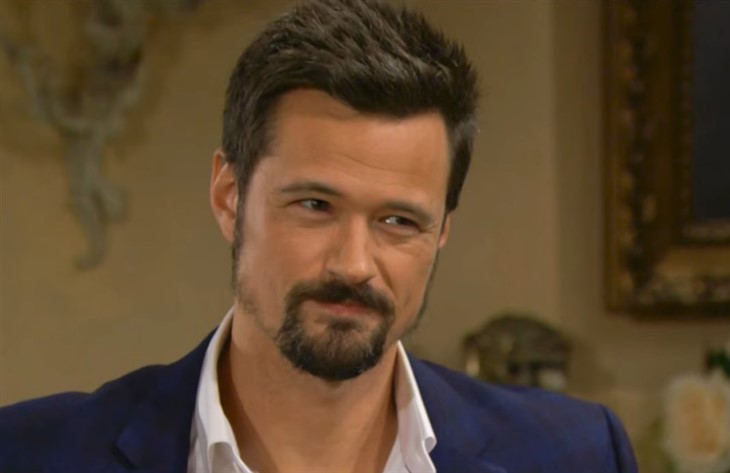 The Bold and the Beautiful spoilers document that Thomas Forrester (Matthew Atkinson) appears to be guilty. While the presumption of innocence is key to a system of rational justice, this is the soap world where Thomas believed a mannequin was an alternate version of Hope Logan (Annika Noelle).

Thomas’ past actions, violent behavior, need to prevent Brooke Logan Forrester (Katherine Kelly Lang) from interfering with his intent to reconnect with his son and revived thoughts of being with Hope all point to the appearance of wrongdoing.

For added measure, Thomas was seen reflecting on the sequence of events that led his dad, Ridge Forrester (Thorsten Kaye), to believe that Brooke called Child Services and reported Atkinson’s character for endangering the well-being of Douglas Forrester (Django Ferri).

Thomas had the motive, means, and opportunity to frame Brooke. All three factors make him the most likely suspect to have set Brooke up.

The motive was driven by Brooke threatening to report Thomas to the government. Yes, she said she would do that if necessary. It appears as though that is where Thomas’ revenge retort originated.

The means Thomas used was shown to the audience when Douglas’ pressed an application on his smartphone. The voice-altering app projected Donna Logan’s (Jennifer Gareis) voice. Thomas either used his son’s phone or downloaded the app and used it.

A short window of opportunity existed after Brooke threatened Thomas. Atkinson’s character was not seen setting Brooke up, which is part of the mystery of this storyline. Viewers do not know for sure if he is the culprit. But he had several days to orchestrate this ruse.

B&B Spoilers – But What If He Is Not Guilty?

On the other hand, Thomas might only sport the appearance of guilt. It is easy to jump to harsh conclusions about Thomas, just as Brooke and Liam Spencer (Scott Clifton) do.

If Thomas had nothing to do with making Brooke look guilty, then Steffy Forrester Finnegan’s (Jacqueline MacInnes Wood) recently demonstrated phone-call- intercepting-skills must be reconsidered. Steffy has been more motivated than her brother to push Brooke out of their father’s life and could be the framer.

Sheila Carter (Kimberlin Brown) skillfully pulled off the New Year’s Eve champagne label switch that damaged Brooke’s life for months. Brown’s character has plenty of time on her hands and could have overheard enough information during one of her excursions as Lina that allowed her to set Brooke up. Of course, another character who has not been referenced could be the guilty party.

The Bold And The Beautiful Spoilers – Hope Spencer Is Intentionally Entangled

Brooke and Liam continue to reinforce that Hope is entangled in Thomas’ life as he intended. Hope does not accept that Thomas has woven himself into her life.

Yet, Thomas is a co-lead designer on the Hope For The Future team. He also engineered her bond with Douglas, which led to her adopting him. That personal connection created a back door that Thomas walks through with regularity.

Hope’s presence, as Thomas’ co-target, projects him as the villain. But again, that is based on his past actions and all swirling circumstantial evidence.

This site is a leading source for everything linked to The Bold and the Beautiful. Check back regularly for B&B spoilers and news!

Home and Away spoilers: Newcomer Tex sets his sights on a Summer Bay favourite