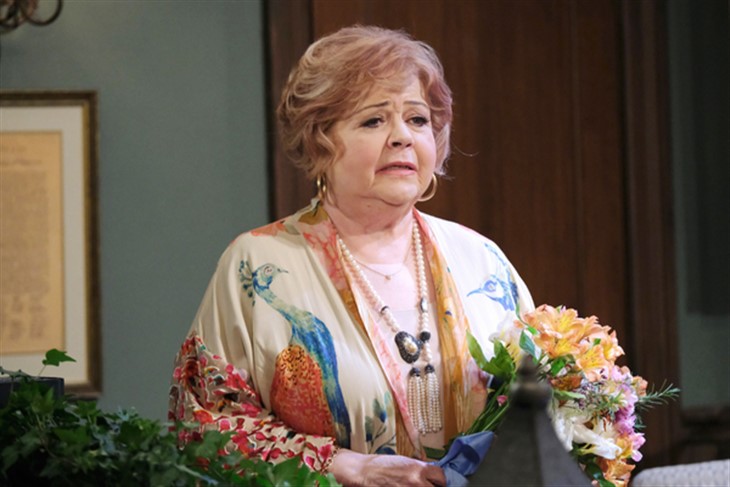 Days of Our Lives spoilers and updates tease in this week’s Soap Opera Digest that Nancy Miller (Patrika Darbo) will have a couple of discussions that get a bit emotional. One is with her ex-husband Craig Wesley (Kevin Spirtas) and the other is with Mike Horton (Roark Critchlow) whose niece her ex-fiancé Clyde Weston (James Read) killed.

Days Of Our Lives Spoilers – Craig Wesley Checks In

Craig is worried about Nancy, who was devastated to find out the truth about her fiancé, now ex-fiancé Clyde, which turned out to be even worse than what she was warned. At least her daughter Chloe Lane (Nadia Bjorlin) and others who tried to warn her about Clyde aren’t giving her the “I told you so’s”. Craig knew when he came out of the closet that it hurt Nancy very badly, making her feel like all their married years together were a lie.

Clyde had basically told her everything she wanted to hear although he may not have been intending to con her about his feelings. But he certainly was not the man she thought he was and was lying to her and Craig feels terrible after what happened between them.

Even though Craig and Nancy can never go back in time and reunite romantically or as husband and wife, they do make up. Craig wants to give her as much support as he can because he does still care about her deeply, and they think about reuniting in a sexless relationship. Instead, they opt for friendship but there is forgiveness and understanding, which is good considering they have two grown daughters and a grandson together. Their relationship morphs into a close friendship and there is love and caring, but more like that of siblings; Craig returning to New York and Nancy still in Salem. Craig and Nancy go their separate ways on good terms, which is the best for their family and there is healing between them.

In the meantime, Nancy and Mike run into each other, and it’s anything but a pleasant encounter of old friends. They know each other from the past but Mike has heard she was ready to marry his niece Abigail DiMera’s (Marci Miller) killer and he goes off on her. Nancy explains her life is ruined, and Craig came out as gay, and explains about Clyde, who she had no idea was putting on a false face.

Once Mike realizes Nancy was fooled by Clyde, even though he seemed sincere about his being a changed man for her, he’s more understanding. The rest of their conversation is lovely and they even discuss meeting up casually in New York, and he puts her number in his phone.

Days of Our Lives Peacock Recap: Gwen Turns On Leo, Has Him Arrested

General Hospital Spoilers: Lucy Reaches Out To Scott — But He Can’t Save Her