Days of Our Lives Recap: Gabi Sees Stefan as Johnny and Ava Kiss.

As we get into Salem, Gabi’s stammering at Li’s proposal. She wants to know where it’s coming from and as Li thinks back to his plan to lock her down before Stefan can, he lies and says it’s from his heart. Gabi’s still taken aback, and Li claims he’s been thinking about marriage for awhile. He’s been “captivated” by her but may have jumped the gun. “No… not necessarily.”

More: The cast speaks out on the Peacock move!

Gabi says that she first thought they were just a fling, but it’s grown into something deeper for her. No one can take Stefan’s place in her heart, but a little while back, Rafe told her not to give up on love. And there’s room for Li… she says “Yes!” Li wants to go celebrate, but Gabi reminds him of the Jake memorial. That pleases Li, who’s excited to see how the DiMera’s react to their upcoming power marriage. 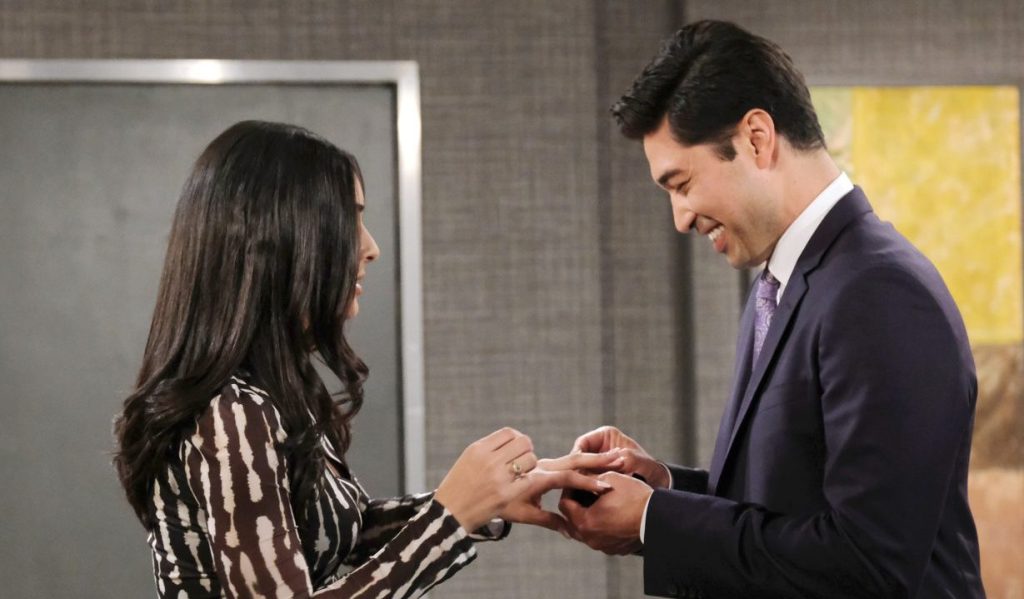 In the crypt, Ava gasps “Jake,” as she spots Stefan in her dead faux-hubby’s suit. When she says, “You’re dead,” Stefan replies, “Not anymore.” Stefan mentions she’s looking pale and suggests she sit down, then reaches out and touches a horrified Ava who thinks she’s going crazy. She runs out, telling a confused Stefan that he’s not Jake. Stefan sees Jake’s plaque and realizes he could be his twin brother.

At the DiMera mansion, Johnny says Ava can handle the memorial, but EJ keeps pushing that it could send her over the edge. Which is exactly, Johnny says, what his dad is hoping for. Johnny insists Ava’s fine and maybe EJ should pay his respects to Jake. “He’s family. That meant something to Nono. I thought it meant something to you.” 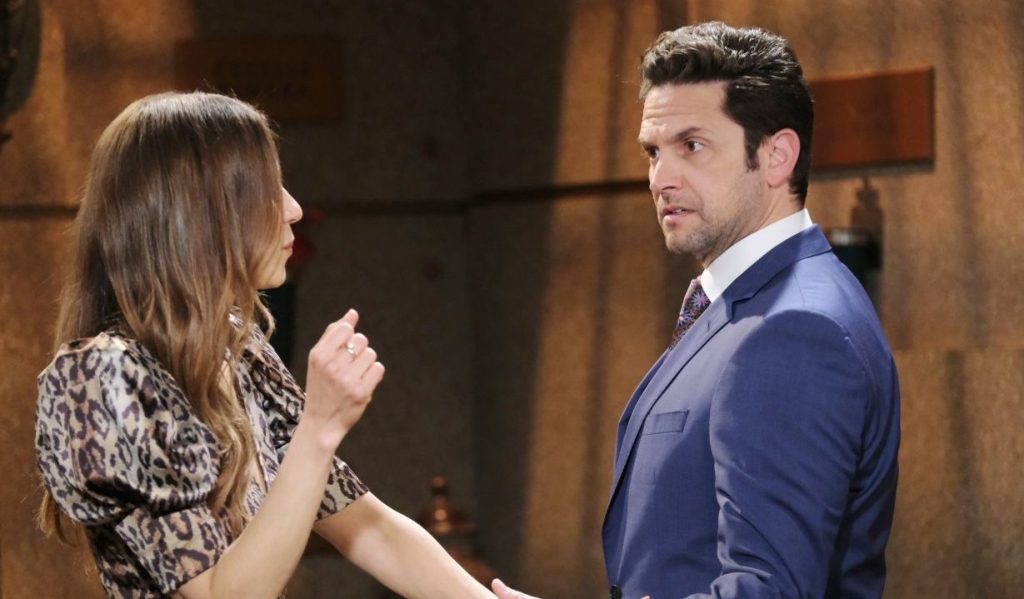 Downstairs, Tony laments the family battling each other. Anna laughs that it’s nothing new, then explains that Johnny has a crush on Ava. ”EJ needs to get over himself and stop trying to control everyone around him.” Johnny walks in and they tell him how lovely the memorial idea is, but then Ava runs up, shaken, and admits she saw Jake again. She explains what happened, she didn’t just see him, but talked to him, and insists it seemed real. Johnny says he doesn’t think she’s crazy, so they head down to the crypt to “see if we can get to the bottom of this.”

Tony reluctantly admits EJ may be right, but Anna shrugs it off as the creepy crypt. EJ walks in saying his son shamed him into attending, but Anna stops him before he can go down to the crypt. EJ just smirks when Tony explains that Ava saw Jake again. Tony just hopes EJ won’t be a jerk to Ava. Gabi and Li walk in and give them the “good” news, and Tony knowingly congratulates them for their “strategic merger.” He then mentions Ava seeing Jake again and Li looks panicked and suggests they go down to the crypt. 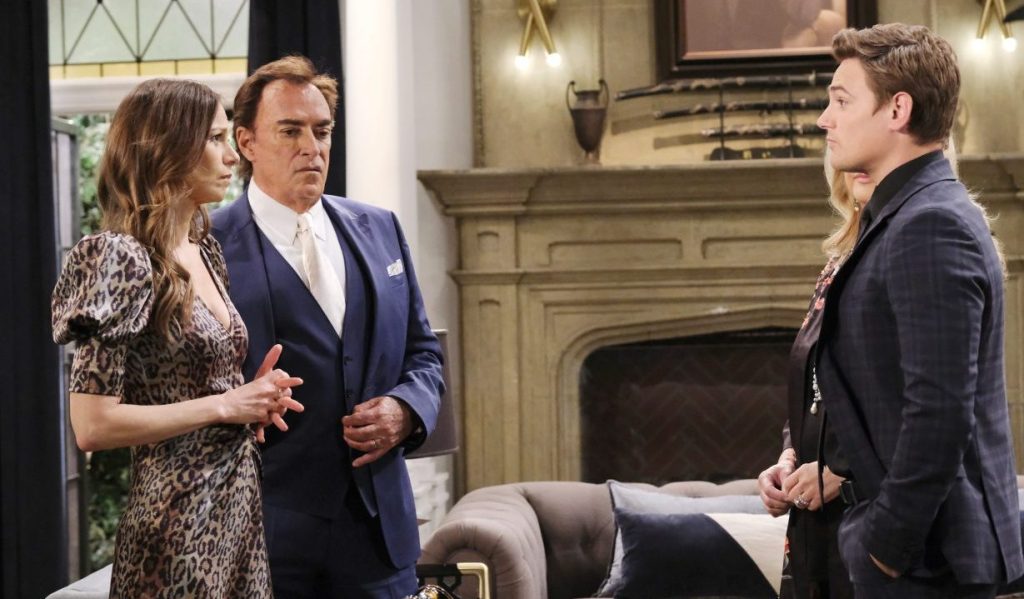 Ava pauses at the door to the crypt, but Johnny tells her that whatever happens, he will be there for her. They walk in, but Stefan’s gone. She tells Johnny what happened with a sad smile, explaining he was in his favorite suit. “But it was impossible.” Johnny mentions that his family has a history of cheating death. Almost everyone but he has done it. Maybe Jake did the same. They should go look!

No, Ava says, if he was, then why didn’t he react to her? Why didn’t he stop her? She’s losing her mind. Johnny insists that even if she’s having hallucinations, it could be a drug or something. This doesn’t mean she’s insane. Ava’s just about losing at this point. It’s too much to handle, not just going insane, but having EJ ridicule her about it. She runs off in tears, right past EJ.

Johnny accuses EJ of gaslighting Ava, but EJ insists she’s doing it all on her own. Johnny doesn’t know how, but EJ’s doing it. EJ gets ticked, insisting he is not doing it, but Ava is an amoral woman who’s lying about being a DiMera. Johnny storms out, telling his dad to leave her the hell alone.

He catches Ava packing in her room and tells her to stay. She thinks she’s being punished, but Johnny says she hasn’t done anything. Ava says she’s done a lot of terrible things, but Johnny scoffs and says the Vitalis have nothing on what Stefano did. “You really are sweet, but you give me too much credit.” Besides, she’s losing her mind. Johnny pleads with her to stay so they can figure it out together. 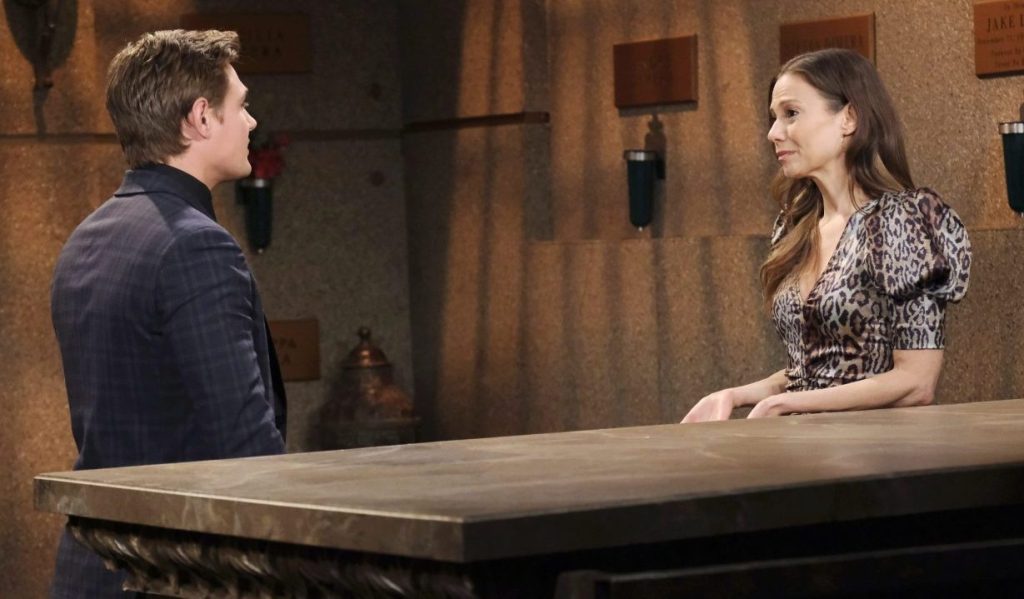 At Chloe’s, Kristen runs around looking for Stefan. Brady demands to know who she thought was there. Kristen claims she thought Randy, “the hunky intern” would be there because Chloe flirts with him all the time. Neither Chloe nor Brady buys it and stop Kristen before she can run off. They demand answers, but once Kristen calls Chloe a “cheating whore,” Brady throws her out.

Down in the lab, Kristen demands to know where Stefan is, but Rolf has no clue. She’s ticked. “I did everything but draw him a map. How could he go and screw things up?” Rolf again tells her that his brainwashing might not have been complete if he didn’t run straight to Chloe. Kristen’s more than worried. “It’s ruining my day! Possibly my entire future!” She blames Rolf, just before she gets a text from Li saying Ava saw “Jake” again. Kristen thinks he went to track down his wife and lights into Rolf for not wiping out his love.

Everyone but Johnny and Ava gather in the crypt where EJ’s going off about Johnny’s accusations. He starts getting into it with Gabi, only for Anna and Tony to play peacekeepers. Tony starts the memorial, just as Stefan gets up to the house and makes himself a drink. He toasts Stefano’s portrait.

In the show’s last few minutes, Kristen lambasts Rolf for failing her and Li. It wasn’t her fault for pushing him. Upstairs, Johnny begs Ava to stay. “This house is a lot more bearable with you in it.” They kiss. Anna congratulates Tony on a lovely tribute, but then they realize they never invited Kristen. They head back to the house, only for Gabi to stay behind to say goodbye to Stefan and “ask for his blessing.” And Stefan walks in as Gabi talks to his grave! 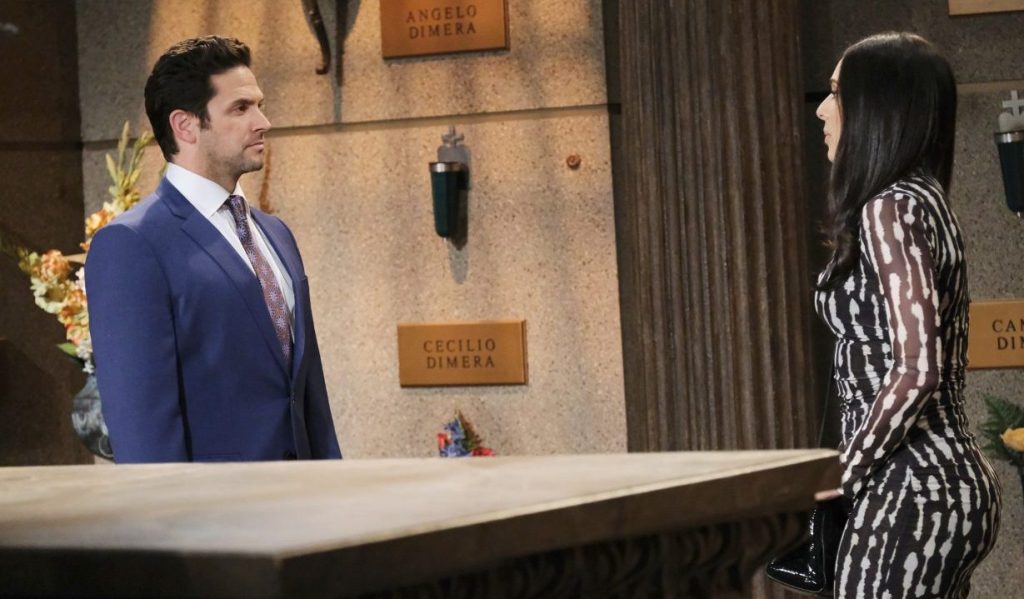 Next on Days of Our Lives: Gabi reckons with Stefan’s return, and EJ finds Ava and Johnny in a compromising position!

Get ready for the big jump with our who’s who and what’s what photo gallery of all things Days of Our Lives!

Y&R Spoilers: Mishael Morgan Explains Why She Went Off Contract

Is Thomas Ready To Be A Full-Time Dad On The Bold And The Beautiful?