Will Hastings choose the “good angel” or upend his life?

Young & Restless’ Elena (Brytni Sarpy) has been making all kinds of moves to cement her relationship with Nate (Sean Dominic), including moving into his penthouse apartment, and more recently, making the decision to leave her Ask MD Now podcast at Newman Media to relocate to Chancellor-Winters where her beau works as Devon’s COO. This will put her in close proximity with her ex, but it’s not Elena who is torn…

Nate has been feeling, well, all kinds of things since joining Chancellor-Winters, but mostly marginalized. Beginning with the launch when he wanted to make a bold announcement and was asked by his superiors, Devon and Lily, not to do so (he did so anyway) he felt like his ideas were getting shot down unfairly.

Nate’s issues have created a divide between him and his cousin and boss, Devon, and Chancellor-Winters’ junior attorney Imani has become his champion… much to Elena’s chagrin. She knows Amanda’s outspoken sister has a romantic interest in Nate and is manipulating him, but her boyfriend either can’t or doesn’t want to see it.

Hence, Elena’s “romantic pickle” that Sarpy discusses in a new interview with her “pal” Melvin Robert on Spectrum News1 on what was his last day with the show.

When asked about what is coming up for Nate and Elena, Sarpy explained that it’s like her onscreen love has come to have a “good angel” on one shoulder and a “bad angel” on the other. We’ll give you one guess which one Elena is in this scenario.

You guessed it — she’s the good angel.

The situation between Nate and Devon has become so tense — and intense — that something’s going to have to give. There’s a growing feeling that things will somehow come to a head, and the influence that Nate decides to listen to — whether it be Elena or Imani — is clearly going to play a role in the outcome.

If Nate listens to Elena, chances are the turmoil will subside and he’ll settle in and do his job… but if he takes Imani’s advice, it’s gonna be a whole different ball game.

Imani has been encouraging him to challenge his boss and make the bold moves that are inflaming the situation. Elena realizes this, so if Nate goes in this direction, it’s going to negatively affect their relationship as well, especially since she’s already confronted him about the woman. 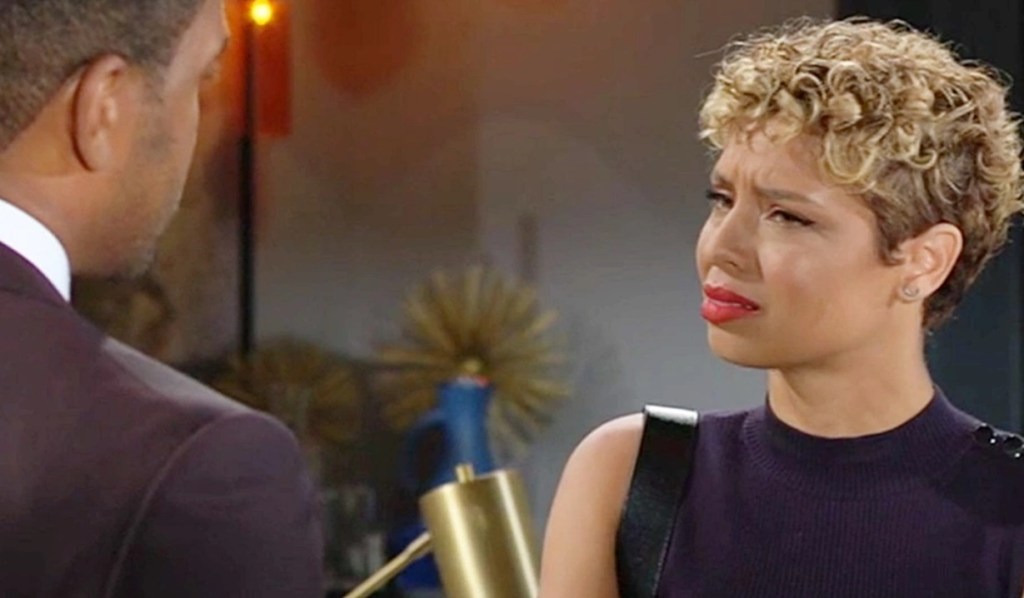 In her chat with Robert, Sarpy revealed that coming up on Young & Restless, Nate will have a choice to make. Is he going to listen to Elena, or go toward Imani, who is the “opposing force?” In her words, “time will tell.”

As much as we’d like to think Nate will see the light, we have a feeling that the “bad angel” has him in her thrall right now. To be honest, it will be soapier if he follows the “bad angel” and all kinds of messiness results. It could even ignite a scandal at Chancellor-Winters that Lily never saw coming!

Watch the full interview to hear what Sarpy had to say about Young & Restless, “finding her voice” in the As Dusk Falls video game, and her work with Do Good Bus, an organization committed to improving the mental health and well-being of the people and communities they serve through connection and purpose in hopes of creating a more unified society.

What do you think will happen in Elena and Nate’s story? How are you hoping it will play out? Let us know in the comment section below.

Look back on Elena’s love story with Devon in the photo gallery below.

Young & Restless Recap: Nick Convinces Victoria Not to Fire Sally After She Misses...

Steffy Declared Ridge Must Return To His ‘Real’ Family. Bold and Beautiful

Young & Restless: Ashland Will Get Revenge on Victor by Going After Victoria