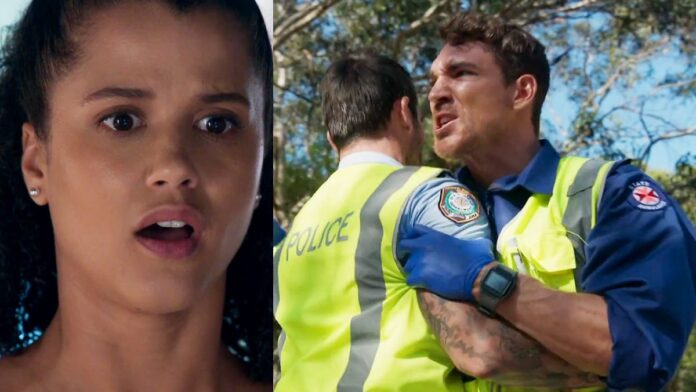 Rose (Kirsty Marillier) and Xander (Luke Van Os) have begun settling into life in the Bay, even with their sister Jasmine away at the farm helping Robbo’s (Jake Ryan) parents with a medical emergency. They’ve just moved into the Pier Apartment and their work is keeping them busy. But it turns out work is also becoming a problem – for one of the siblings, at least.

When Cash (Nicholas Cartwright) and Rose (Rose) are called to a car accident, Rose is shocked to witness her brother doing CPR to a young cyclist victim. She approaches him first, but Xander is annoyed by her order of business and recommends she deal with the driver instead because he smells of alcohol. The cyclist is still being worked on by him and his colleague, but things are not looking good.

Eventually, Xander’s coworker signals for him to halt, since the rider has already passed away. As his irritation rises to wrath, Xander suddenly attacks the driver. Everyone is shocked when the paramedic tells the driver how reprehensible his behaviour is and the already rattled driver is overflowing with excuses. Apologies, though, are insufficient for Xander.

While Rose takes the driver into custody, Cash must restrain Xander. Then, she pulls her brother aside and tells him that his emotional involvement is inappropriate in the workplace. She needs to do her job and let Xander do his, he tells her, but he won’t listen. Rose, who is worried about Cash’s outburst, won’t let the matter go and instead debriefs with him.

Cash ponders if Xander’s behaviour should be reported as the two police officers converse. Rose contends that Xander must have simply had a bad day. Xander used to be fairly humorous when he was younger, but he’s had some awful experiences in the previous few years, including a catastrophic relationship and their father’s passing, Rose thinks later while speaking to Tex (Lucas Linehan). Does Xander’s emotional baggage affect his capacity to perform his duties?

Home and Away Spoilers – Romance for Nikau and new arrival Heather

Home and Away – who is newcomer Heather Fraser?

Home and Away lines up danger for Ziggy in baby storyline

Home and Away spoilers: Nikau Parata can’t find the courage to accept his bravery...