Days of Our Lives: Are Ava/EJ Getting Together? Did Gwen Kill Abigail? 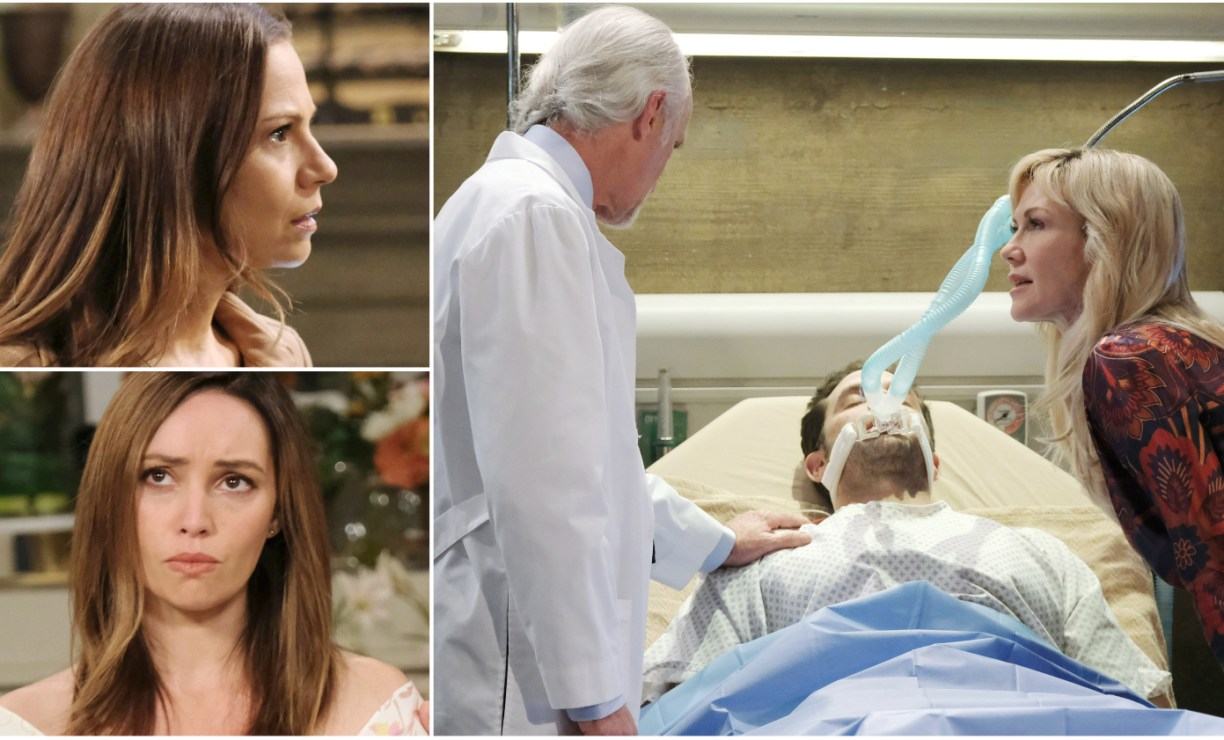 Days of Our Lives’ big twist with Jake’s death ended up being pretty straightforward, but there still may be a few surprises in store. One of the biggest ones, though, might be that love is finally starting to blossom in Salem! But the big question this week is: Are we getting closer to finding out Abigail’s murder or are the waters just getting muddier?

I’ll readily admit my Stefano theory from last week was a long shot, but I was still hoping that the twist they had in store for us wasn’t the obvious one. It was. Jake’s out, Stefan’s in.

More: What Days of Our Lives *must* tell fans

I think the biggest surprise with this “twist” is that there are no brain chips or “essence” or any crazy mystical explanation of how Jake’s being switched out for his brother. Yeah, there’s a strange blue, glowy Iron Man thing in Stefan’s chest, but at the end of the day, we’re basically dealing with a transplant story. Four years of unmonitored life support aside, that’s almost normal. 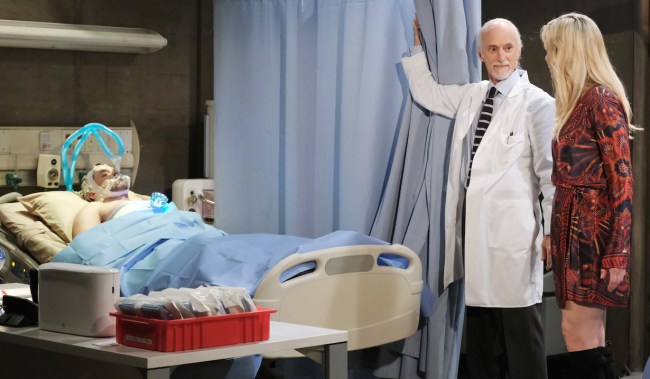 “Yes, Kristen, it is true! I have turned Stefan into… a nightlight!”

What’s more interesting is what’s going on with the fallout from Jake. Though I can’t help but feel like Gabi’s relative callousness is more serving plot than anything else. Yeah, she’s being called out on it, but still, the point seems more to set her up for a Stefan reunion, than anything else. But I remember how hurt and angry Gabi was when she thought Jake betrayed her. Maybe Stefan is her true love, but her feelings for Jake were not shallow, so why is her reaction?

On the other hand, now that Jake’s toast, I’m kind of loving him and Ava together. Their relationship is more real dead than it ever was alive, and her mourning feels genuine. But she’s still shrewd and pragmatic enough to understand that she’s got to look out for her own best interests now that he’s gone. She’s acting more like how I feel Gabi should be acting.

Plus, getting to see the mafia princess tangle with the DiMeras should be fun. As she pointed out, their hands aren’t any cleaner than her own. And moving in to the DiMera mansion at EJ’s invitation? I smell a chemistry test coming up. The son of the Phoenix and daughter of a mob kingpin? If those two could put aside their enmity, they’ve got it in them to rule all of Salem — at the very least. Actually, they could make a fun love/hate couple enmity and all. If the show pulls it off, this could end up being the best thing to come out of the Jake/Stefan debacle.

And the Killer Is…

Xander and Sarah: Private Eyes is what I’ve been waiting for. OK, maybe I didn’t see them playing detective, but I am so here for it. The show finally got back to showing why fans fell in love with them to begin with. They’re so much fun together, even when dumpster diving. Actually, especially when dumpster diving. I cannot wait to see more of these old school screwball comedy scenes with them! 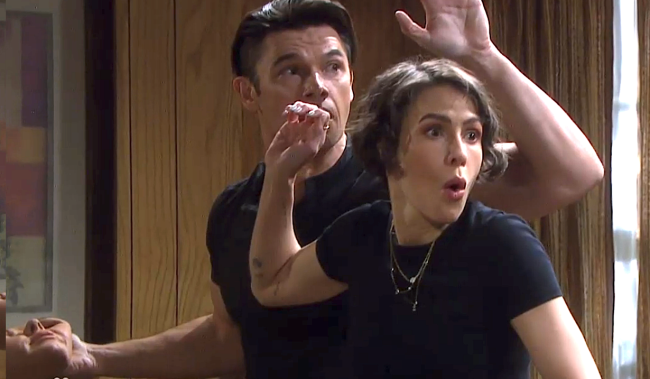 That ridiculous mask has been used against “Xarah” far too many times for them to have taken this long to figure it out!

As for Gwen: Really? That mask would be so easy to destroy. Shred it, cut it apart, melt it. I don’t care, just do better than a dumpster outside your hotel. Still, her casual way of disposing of it didn’t make it seem like murder evidence. Unless she’s that blasé about killing her own sister.

I think that Gwen was there the night of the murder, but I don’t buy that she did it. She may, though, have seen something, but having snuck out of prison and broken into the DiMera mansion in a Sarah mask, she can’t say anything without getting herself into trouble. Admittedly, though, I’m not sure what she would be doing there impersonating Sarah if not to frame her, but maybe she planned on killing Abigail but found someone else beat her to it?

Someone like Leo? He’s the last suspect left after Gwen… that we know of. But also, his confronting Gwen felt more like fishing to find out what she might know than anything else.

Master Plan or Dead In the Water?

What is Orpheus’ game? About all he seemed to accomplish in asking Marlena for help with Evan was riling John up. And that just seems like a bad move, seeing as how Steve’s trying to convince him to help murder Milo.

I’m hoping for his plan to tie somehow into Abigail’s death in a grand plot to… I don’t know. I’d really rather that than it be its own thing. But Orpheus isn’t Stefano, so I don’t know how much of a brilliant gamemaster he is. At one time, it almost seemed like Evan and Jan’s baby had something to do with the plan, but then Evan got his son and announced he was leaving, only for Orpheus to just get a little sad and act *gasp* human. Unless he’s the one who sent Jan to the docks… 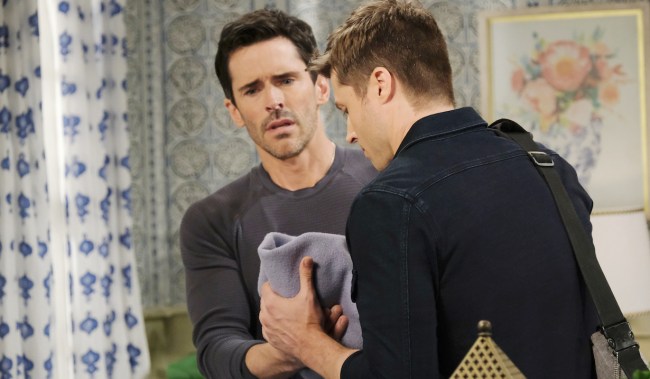 “Wow, Evan really is dumb. I just handed him an empty bundle of blankets and he didn’t even blink.”

As for Shawn, I was dreading, but waiting for him to lash out at Belle. It was inevitable that he’d accuse her of getting exactly what she wanted after Evan took his son back. And I don’t think he’s wrong. There has to be at least a little part of Belle happy to have the living reminder of her and Shawn’s difficulties gone. But that doesn’t mean she’s not genuinely heartbroken at her husband’s pain.

Too bad Jan’s going to make sure this little saga isn’t over just yet. She’s not a fit mother, so now that she has Shawn Christian Maddox Frears Brady etc. and has vowed Salem will be seeing them again, Shawn and Belle may still get their chance to play parents someday — whether Belle wants to or not!

At least they might until Evan comes back. Unless that boy can’t even doggie paddle, he’s not dead.

• I loved Jada’s handling of Xander, especially with his Rex explanation. “Oh, he never really got over her, did he? And now he’s covering for her murder charge!”

More: Is Jada headed for an Eric romance, or something more?

• I was so happy to hear Alexander say that Adrienne was a mother to him too. And to find out he’s a devious Kiriakis through and through.

• That Thomas and Chad scene… Oof. That was heartbreakingly acted. It even makes up for the over-the-top drunk Chad scenes that started veering dangerously close to comedy.

• Paulina couldn’t listen to “Which twin should I choose” any longer so she considered plotting with Johnny to keep it going? What? Enough! Johnny, move on. Chanel, good for you, putting them on notice.

• Lucas changing his plea to “Guilty” is not a Friday cliffhanger.

Check out the photo gallery below for the latest Bold & Beautiful couples updates if you’re hungry for a little more love.

Home and Away Spoilers – Baby surprises for Ziggy and Marilyn

Days of Our Lives: Now That Gwen’s Free, Will She and Xander Reunite?