In Sonny’s office, he tells Dex that he’s shown him that he’s capable and if he keeps it up there may be a place for him in his organization. He has another job for him to prove he can trust him. Sonny shows him a photo of a man named Beckett Reed who is the manager of a theater with no criminal record. Dex wonders what he’s done to make onto Sonny’s list. Sonny explains he is a jury foreman on a trial, and he needs him to know Trina cannot go to prison. 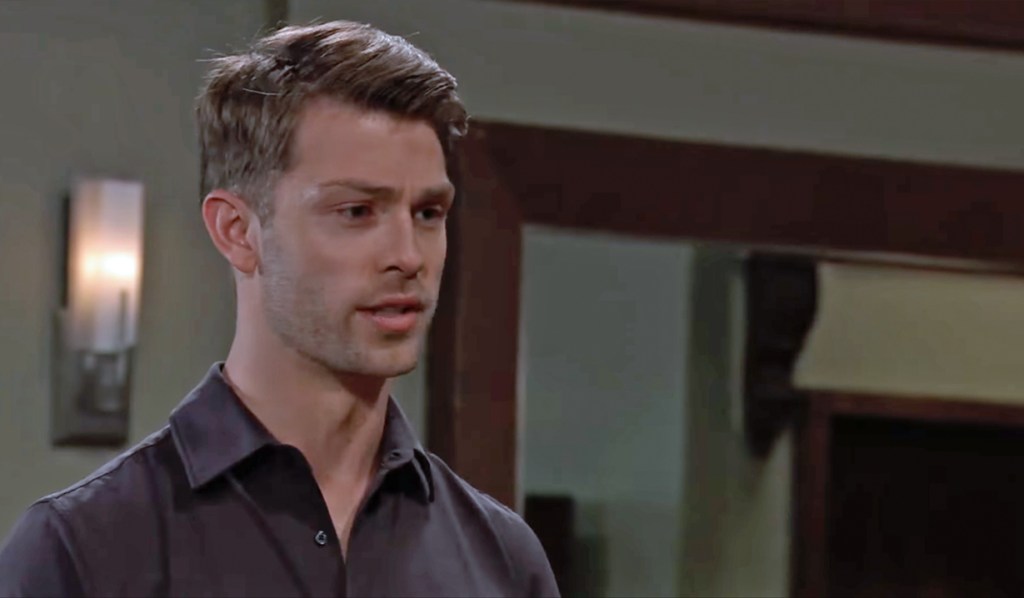 Dex asks why Sonny wants this done. Sonny tells him part of this job is not asking questions but he tells him that Trina is innocent of this crime and is a good girl. 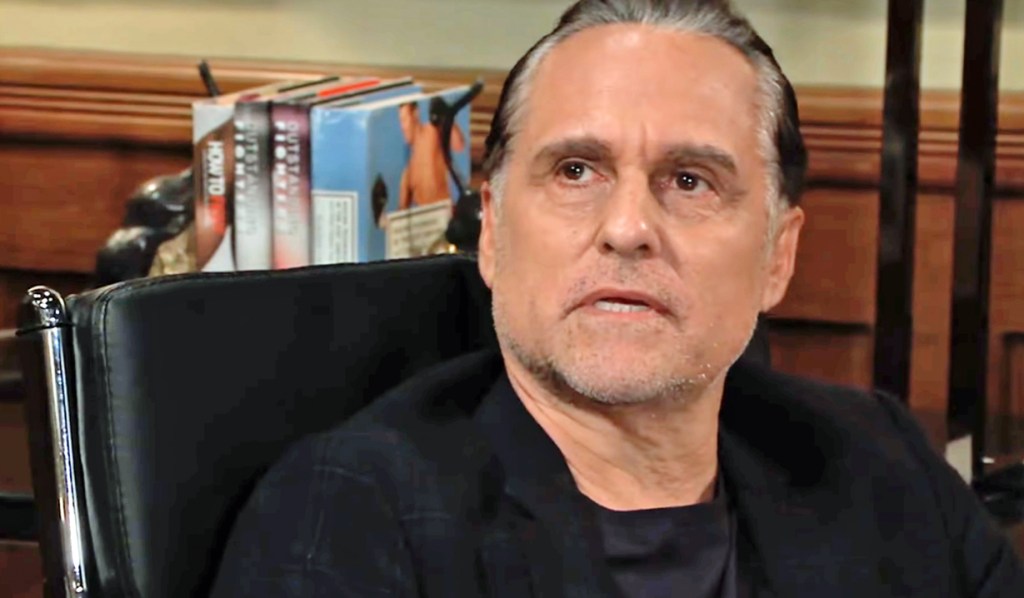 At Kelly’s, Joss meets up with Carly, who can tell something is bothering her daughter. They grab a table and Joss fills her mom in on Spencer believing in Trina the entire time and working to try and trip Esme up, and that Cam knew and kept it from her. She knew something was off about him for months, similar to how her mom knew something was up with Sonny. 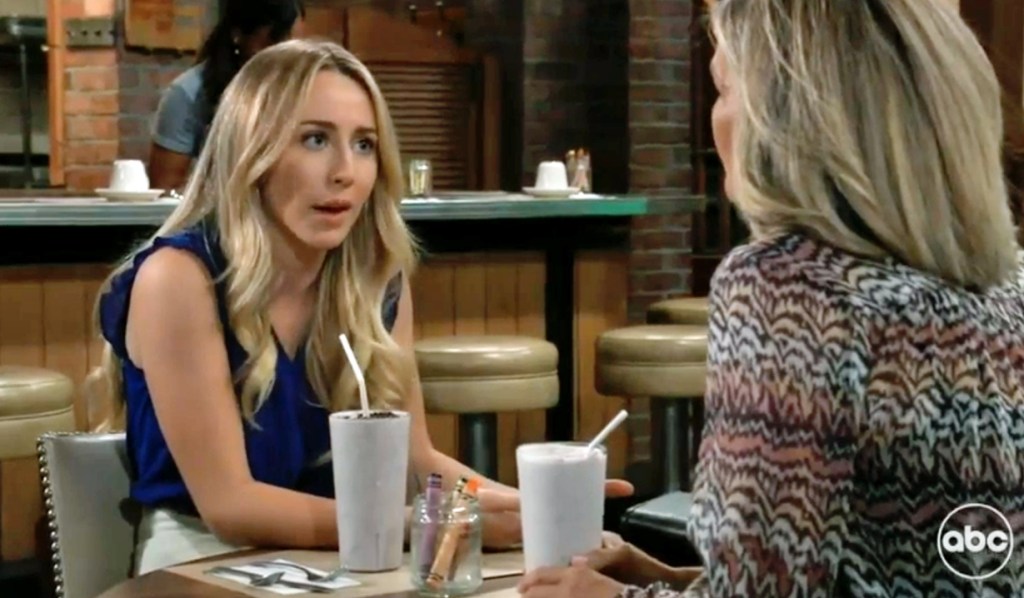 As Joss vents about what Sonny did to their family, Carly explains she’s moved on Joss should too. Carly advises that all the energy spent wanting revenge and to see Sonny fall is better spent elsewhere. She has let it go and thinks Joss needs to as well.

Outside of Kelly’s, Dex finds Beckett and says they have a lot to talk about regarding the Robinson trial. Beckett insists he can’t speak of it but Dex advises he’ll want to hear what he has to say. Later, Dex has Beckett against the wall and he makes sure Beckett knows to find Trina not guilty. Joss exits and spots Dex and recognizes the juror. The juror runs off, and Joss asks Dex just who the hell he is. He introduces himself as Dex Heller. Joss assumes Sonny sent him to talk to that man, but he says, “Sorry, I got nothing.” Joss isn’t shocked and storms back inside. 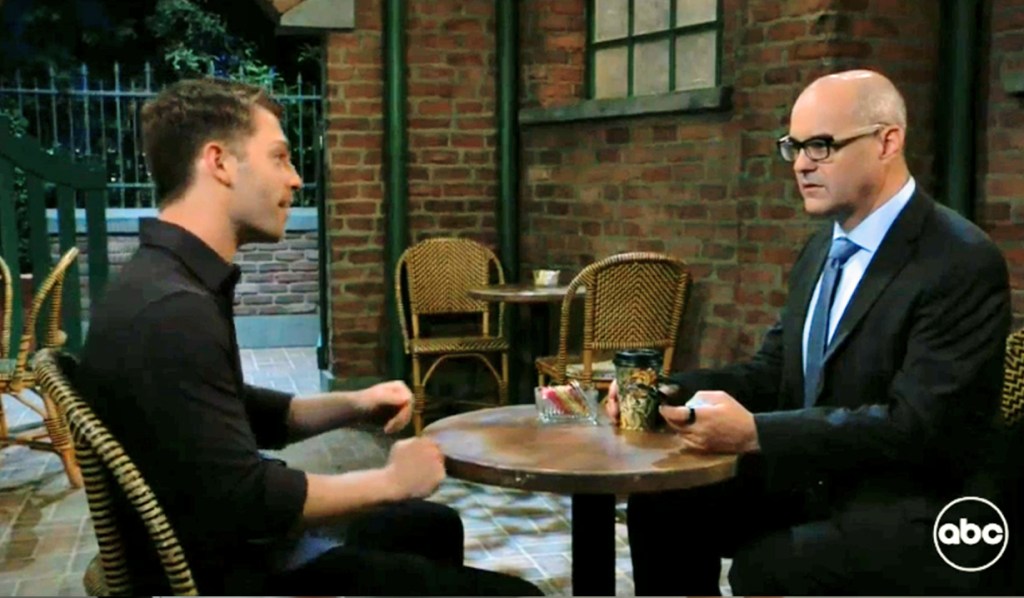 Back inside, Joss fills her mother in on what she just witnessed. Carly isn’t shocked Sonny would step in to influence a juror. Joss says this isn’t right, but Carly notes it’s not right for Trina to go to prison either. Carly asks what she will do about what she saw, but Joss thinks there is nothing she can do. 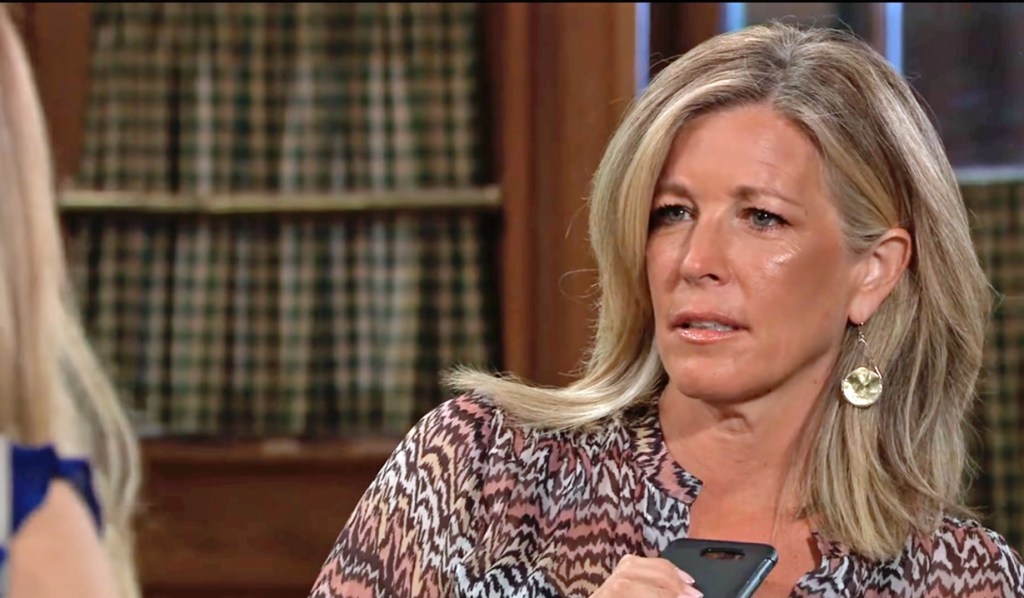 More: NBC moves Days of Our Lives to streaming platform

In the Metro Court garage, Sasha confronts Smoltz and Sienna, who are sitting in his car, about setting her up. Smoltz and Sienna exit, and Smoltz offers to drop the Harmony Miller angle if she’ll confess that she’s using drugs again. She asks why he is doing this to her, and he taunts her that this is what sells. He asks, “So was it after your kid died that your went back to drugs?” Sienna tells Smoltz that’s going too far. 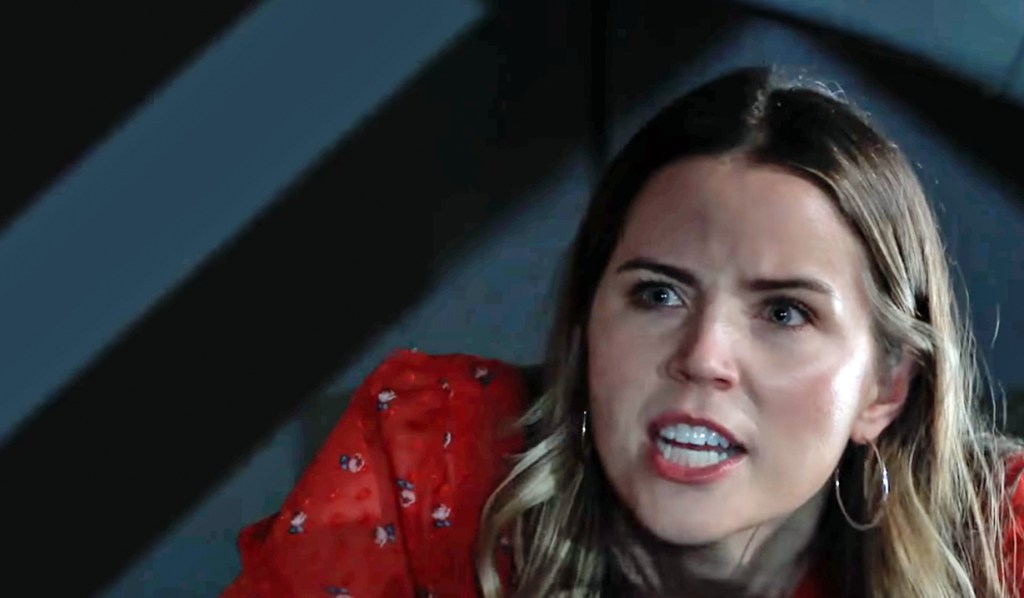 Sasha loses control and begins smashing Smoltz’s windshield with a parking sign. Brando appears and grabs her and tells her to stop as she screams, “Leave me alone!” Sasha breaks down sobbing. 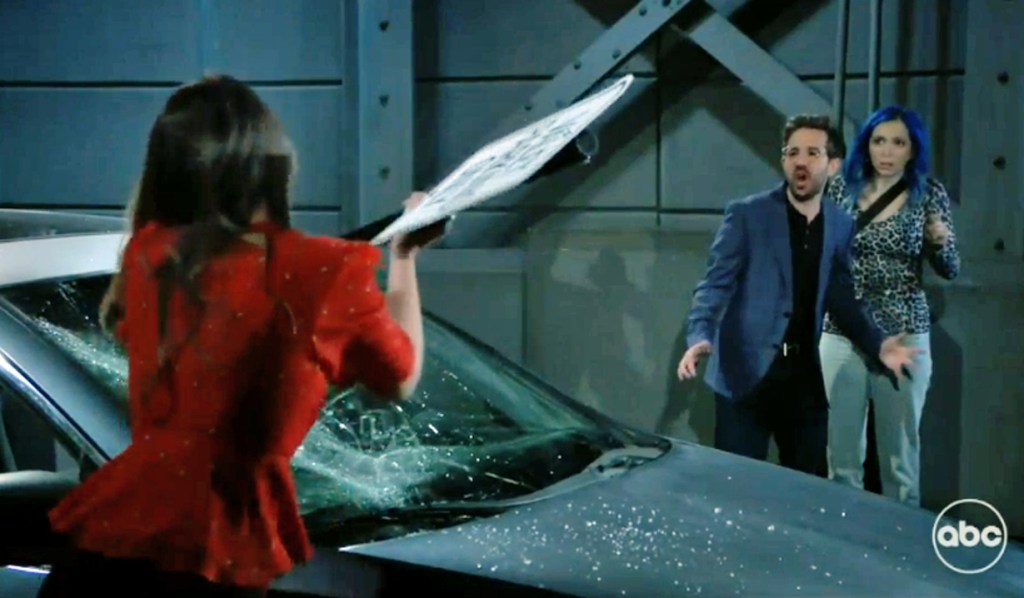 At the station, Dante speaks with Jordan about the next steps in his career. He knows he had to turn down an out-of-town assignment, but he couldn’t do that to Rocco. He needs to stay local and hopes it won’t derail his advancement. Jordan doesn’t see why it should. They’re interrupted when an officer says an altercation just occurred at the Metro Court involving Sasha Gilmore and a reporter. Dante departs to handle it. 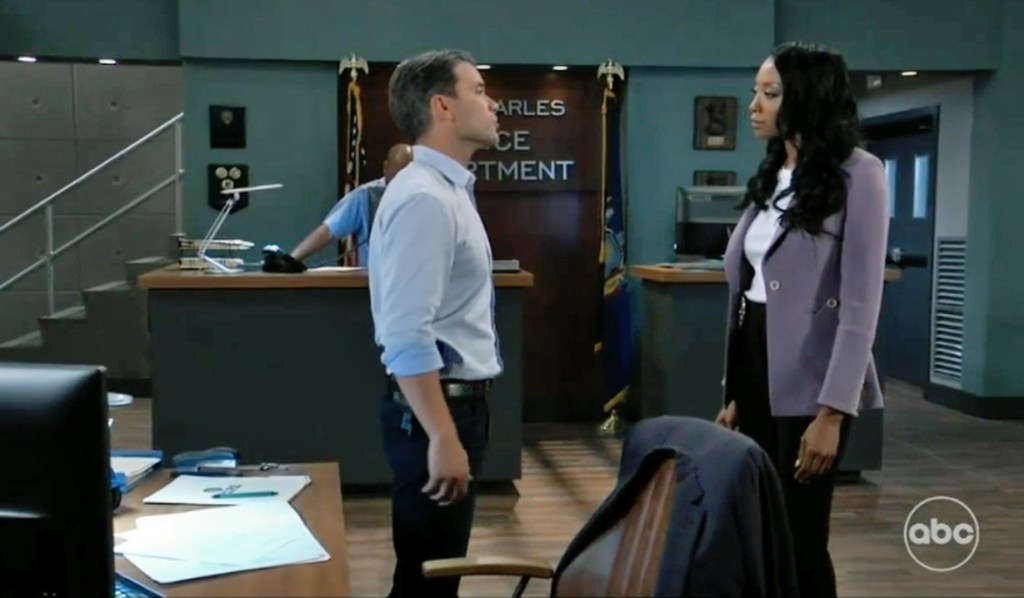 Back in the garage, Smoltz gloats he just wanted to prove that Sasha was high when she ran down Harmony, but this is so much better. Dante arrives and sees Sasha in a bad way. He talks to Smoltz, who claims Sasha just attacked him out of the blue with no provoking, and he has it all on his dash cam. He is going to press charges. Dante returns to Sasha, who is unable to speak. Dante informs them Smoltz is pressing charges and he has to take Sasha in. 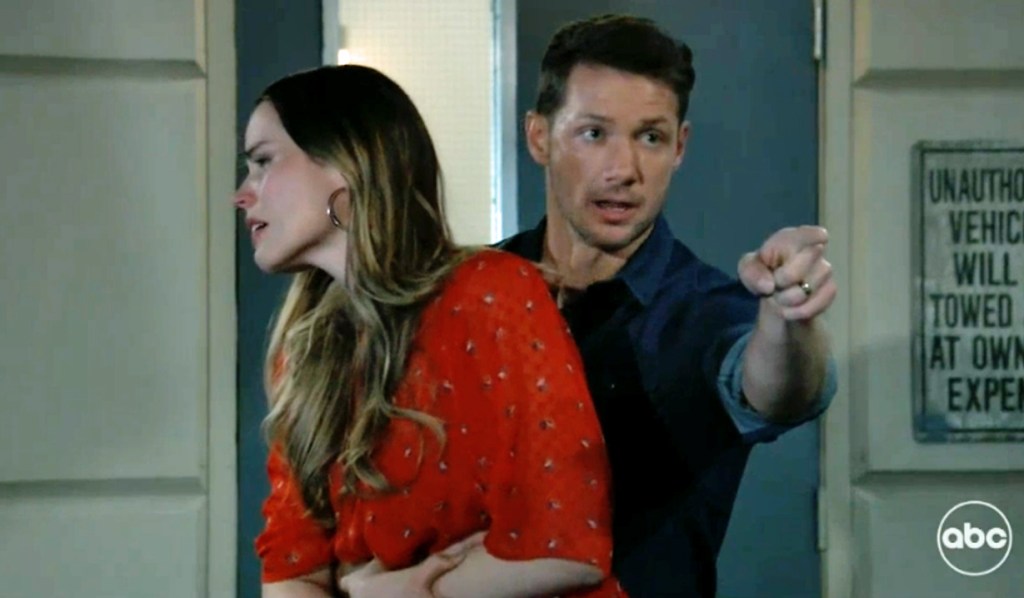 Dante and Brando enter the PCPD squad room with Sasha in cuffs. Brando tells Sasha not to say anything. Dante takes her into the interrogation room. There Dante offers to get her a lawyer and she can probably countersue Smoltz. Sasha finally speaks and weakly states,” I couldn’t stand it anymore, I am so tired.’ Dante exits as Brando tells Jordan that the dirtbag must have done something to provoke her. Unfortunately, Jordan’s hands are tied, and Sasha will have to stay in a cell until the morning. Brando screams that Sasha won’t make it here. 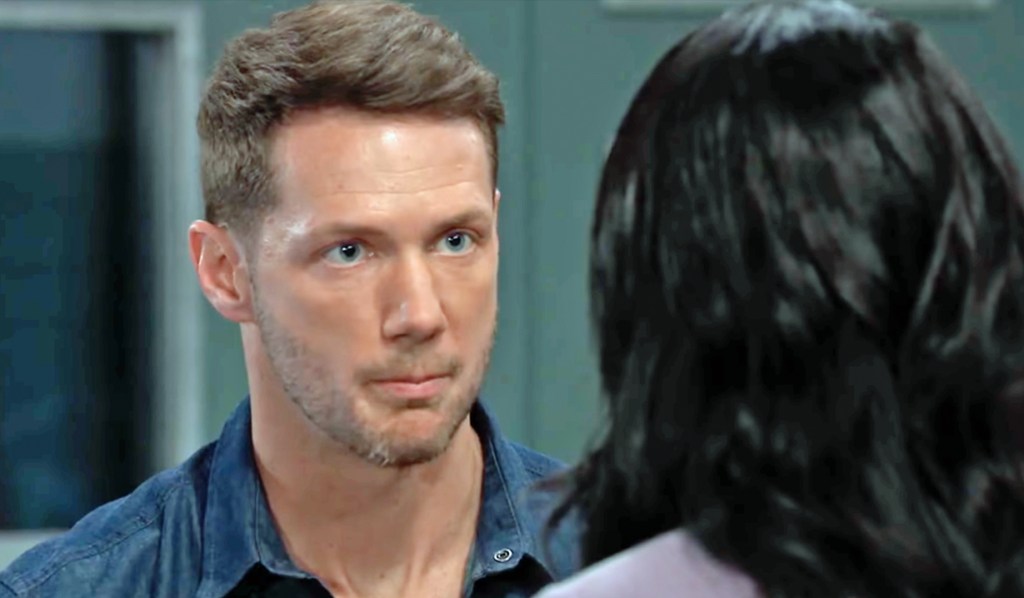 Brando calls Sonny and tells him that Sasha’s been arrested and they are holding her overnight. Sonny says he’ll be right there, but Brando thinks there isn’t much he can do. Brando tells him to stay put and that he will keep him posted. 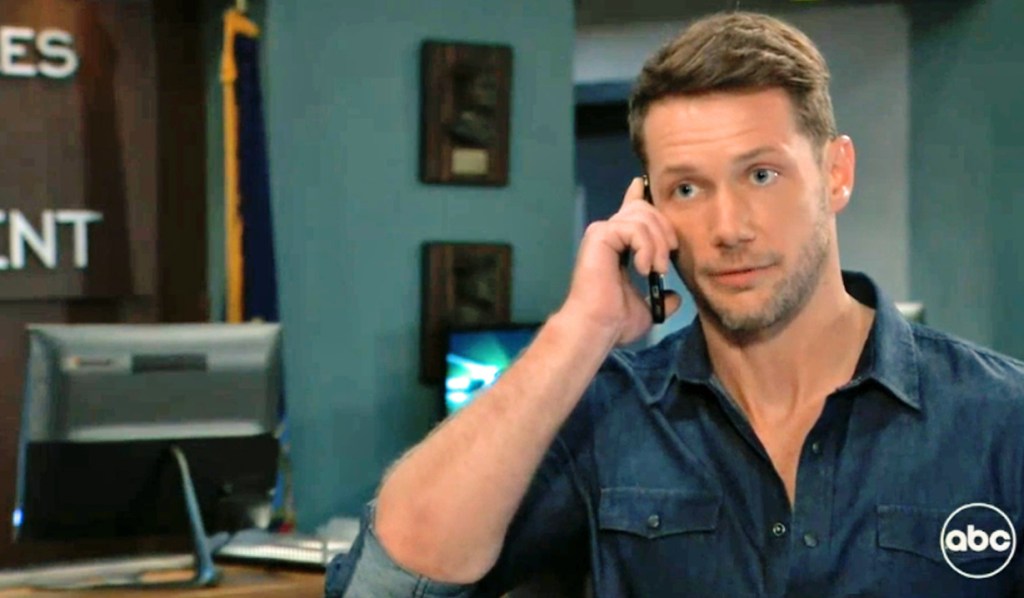 Later as Sasha is booked, Brando implores Jordan that this is a mental health issue, and this is traumatizing for Sasha. He fears she won’t recover from this. Sasha is brought out after being fingerprinted and photographed, and Brando runs over and promises to get her out of here first thing in the morning. She’s led away, and Brando fumes.

Back at Sonny’s, Frank arrives, and Sonny asks if it is done. Dex soon enters, and Sonny asks him how it went. Dex explains he gave Beckett the message, but Joss saw them together. Sonny tells him to take the night off, and Dex leaves. Frank confirms he had eyes on Dex and he didn’t leave anything out of what happened. Meanwhile, Dex calls Michael and says they need to meet and renegotiate their deal.

At the hospital, Portia fills Curtis and TJ in on Spencer’s testimony. She says Spencer, along with Cam and Joss testified that they believed Esme made the tape, so she doesn’t understand why Esme isn’t being investigated. Curtis explains Jordan’s trying to connect her to the bartender, but bringing Oz out of his coma will take time. Portia cries, “There has to be something they haven’t explored.” She can see TJ and Curtis giving one another looks and demands to know what is up. 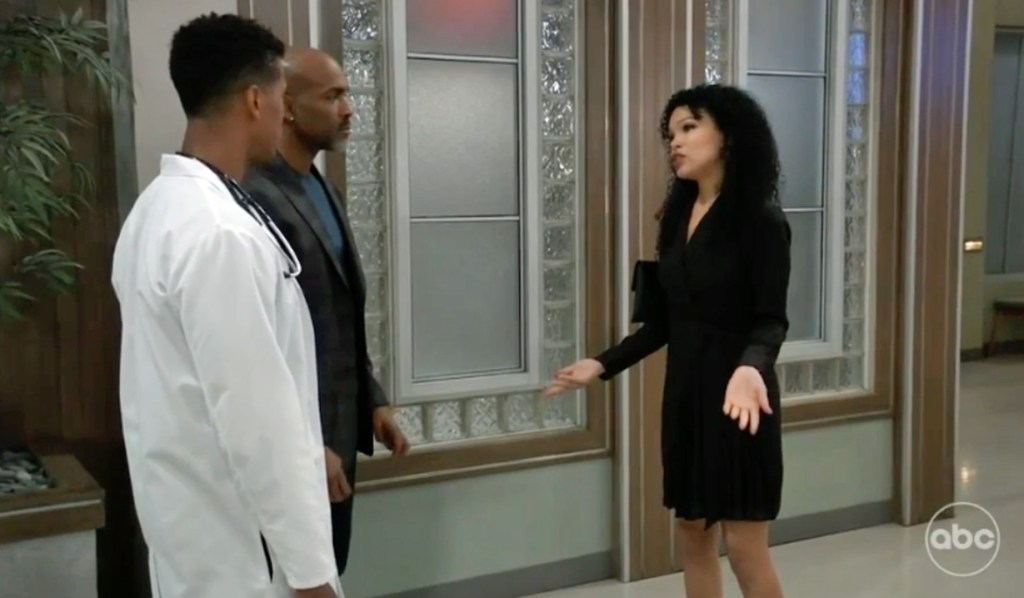 TJ, Curtis and Portia go to her office. Curtis informs her that he and TJ are exploring the option of waking Oz up with a drug that will quickly bring him out of the coma. She asks if they have lost their minds, as this is highly unethical. Curtis explains his theory that Esme drugged Trina at the cabin and that’s why the drink hit her so hard. He believes Oz’s testimony can change everything, but Portia forbids TJ to give Oz the drugs. TJ eventually promises he won’t. The young doctor is paged, but before he leaves, Portia tells him that she won’t forget what he was willing to risk for Trina.

Alone, Curtis implores Portia to let them do this as he sees no other way than to wake Oz up. Portia refuses to let another doctor go to jail to save her daughter. He realizes Portia is going to wake up Oz herself.  She admits she’s going to do it on her own, as she doesn’t want him or TJ to jeopardize their futures. Curtis insists Trina is his family now too, and they will do this together. Portia realizes she can’t say no to him. 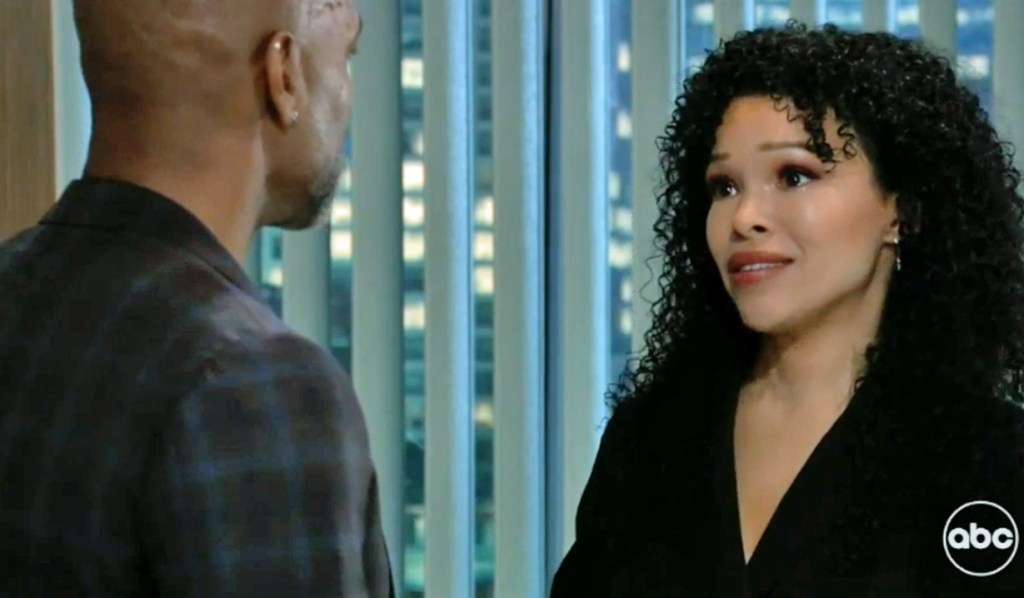 On the next General Hospital: Gregory and Alexis revisit their bet. Chase asks someone if there is news of him getting back on the force. Maxie asks Lucy if she’s forcing Sasha out. Martin informs Brando there is only one way to keep his wife out of prison. Dante tells BLQ, “I know a con when I see one.”

View the gallery below of bloopers and outtakes from all your favorite soaps.

Bryan Dattilo Off Contract at Days of Our Lives!

Transgender Neighbours star Georgie Stone, 22, set to share her story in a new...

Days of Our Lives Recap: Shawn and Evan Learn Who Fathered Jan’s Baby