Days of Our Lives: Gwen Plus Rex’s Return Could Split Up ‘Xarah’

Are they forever doomed to failure?

It’s hard, after a while, not to wonder whether Days of Our Lives‘ “Xarah” is cursed. The list of complications keeping them apart has been impressive, even by soap standards. From baby tragedy to kidnapping and a series of mental health crises, they just can’t catch a break. And then there’s Gwen.

Once upon a time, she truly did seem ready to step aside and let Xander and Sarah find happiness together. But that was when she thought she’d be spending years in prison. Now that she’s free and Sarah’s a “person of interest” in Abigail’s murder, that kind of noble self-sacrifice seems just a tad bit excessive. It may not be time to give up on Xander quite yet.

But if we’re being really honest, Gwen on her own may not be all that much of a threat to ‘Xarah.” 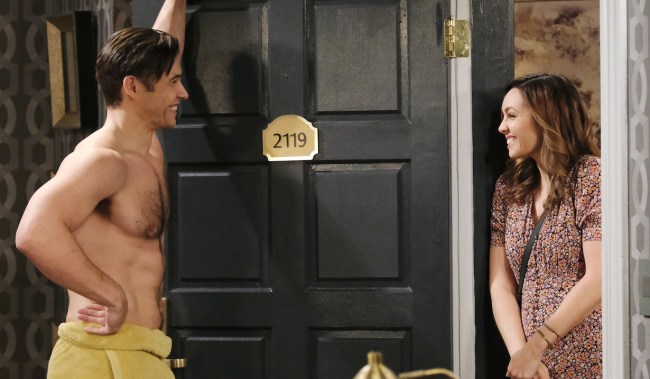 Yeah, a half-undressed Xander comforting his devious ex may not be ideal, but while he may still have some kind of empathy for Gwen, it’s clear that his heart lies with Sarah. His urge to protect his fiancée is powerful. Sarah’s hurting and scared right now, and Xander’s not going to turn his back on her. In fact, as Paul Telfer told Soaps.com, Xander’s protective nature towards Sarah trumps practically everything else — even good sense!

“He would definitely get himself into some real trouble to do something for her,” the actor explained, “whether she liked it or not.”

Xander proved that by going after Lucas as viciously as he did, but fortunately, he seems to have calmed down… For now. He’s far from giving up on clearing Sarah’s name because while Xander is capable of anything, he will never allow himself to think Sarah would ever be anything but perfect. As Telfer noted, “So much of his thing with Sarah is what she represents to him. She’s on this pedestal to him.”

Gwen, on the other hand, was always more on Xander’s level. That’s why they worked so well — at least at that point in their lives. But when she betrayed him and hurt Sarah, she lost even that much standing in his eyes. Ultimately, empathy and understanding for a fellow rogue who may be genuinely remorseful aside, could Gwen ever really be competition? Not if Sarah keeps her cool and keeps her focus on the man she loves.

That, though, might be tough to do. There’s a lot that Sarah’s just glossed over from her time away. From Xander’s marriage to Chanel, to his romance with Gwen, she’s been taking it all in stride, smiling and nodding and brushing the surprises away as she focuses on her happily ever after. But that happiness keeps getting pushed further and further away.

It’s inevitable that sooner or later she’ll need an outlet for not just Xander’s inability to cut Gwen out of his life, but everything she’s been forced to process. It would only be natural for her to turn to someone she knows, someone she’s comfortable with, someone who understands what it’s like when the person you love is constantly drawn to someone else.

Someone like Rex. He’s back in Salem soon, and last we saw him, he, too was smarting over getting dumped when Kristen was running around in her Sarah mask. He never lost his care and concern for his former wife, though, and had even made a pact with Xander that they’d both keep an eye out for her. 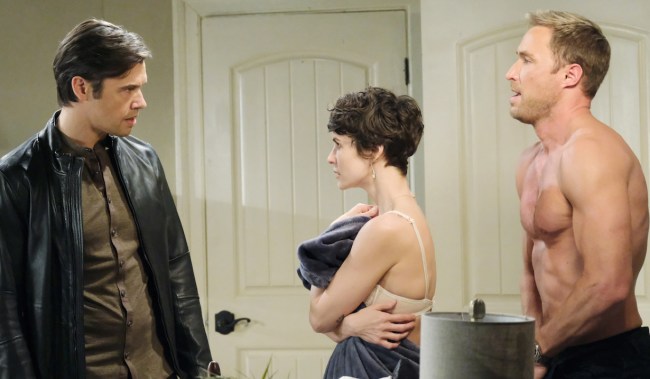 “What do you mean what are we doing?! Rex was just trying to make me feel better! You know, like how you do with Gwen.”

Would Sarah pay much attention to Rex if Xander didn’t have Gwen sniffing around? Probably not.  But if she’s got something she needs to say, there’s no doubt that he would be more than happy to lend an ear! And maybe offer a comforting, half-undressed hug or two to Sarah. Fair is fair, after all.

If just one half of “Xarah” is distracted, that’s not the end of the world. But if Xander and Sarah both take their eyes off of each other, sooner or later, one of them is going to walk off a cliff, and the other won’t be paying enough attention to stop them.

Take a look at our photo gallery of Xander and Sarah’s seemingly never-ending roller coaster romance!

How Ada Nicodemou’s close-knit family with son Johnas came together after a divorce and...

Home and Away spoilers: WHY is Xander Delaney ANGRY with sister Rose?