Days of Our Lives :. The pruning of this family tree is just about getting out of hand.

Somebody call Bananarama because it looks like we’re trapped a cruel summer on Days of Our Lives. According to spoilers for next week, the Grim Reaper isn’t through with Salem just yet and we’re going to have to contend with another death so soon on the heels of Abigail’s murder! Worse? It’s another DiMera!

More: Is Arianna coming back with a vengeance?

We know they aren’t exactly a family of angels, but at this point, we’re starting to wonder what a DiMera’s got to do to stay alive. Andre (and/or Tony, seemingly depending on the current regime’s mood), Lexie, Benjy Carver, Renee DuMonde, Megan Hathaway (whoops, strike that), Stefan, Abigail (through marriage) and now… Jake?

Sometimes it feels like whenever a new DiMera pops up, they’re soon nipped in the bud. Granted, if all of Stefano’s offspring survived, pretty much the entire cast of Days of Our Lives would be made up of his family… but still.

In any case, while the spoilers don’t name Jake directly, they do point pretty darn strongly to it being him! Just after he and Ava start talking about their future, Jake proposes to her… and then there’s another death. She’s devastated, the DiMera clan is reeling from another tragedy — it’s not that far off from what happened to Abigail! Just as she and Chad were planning their future and trying for another baby, someone killed her. 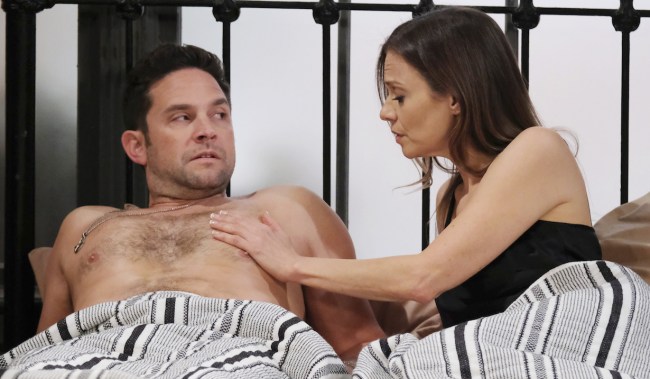 Not so happy together?

Now the same thing may just be about to happen to her half brother-in-law. But if Jake is headed for the pearly gates (or wherever DiMeras go when they die), that still leaves us wondering if it’s a natural death, an accidental one or another murder!

Time will tell, but right now, it looks like Ava won’t get her happy ending and we’ll never see Gabi reunite with the man she loved before Satan ruined it all. And does this mean we’ll be seeing the end of Brandon Barash? Not necessarily. We’d heard rumblings of Abigail’s demise for some time before her departure, but this death has been mostly kept under wraps.

There’s always the chance Barash could pop up as another character, much like what Robert Scott Wilson is doing switching from Ben to joining the Kiriakis clan. Or heck, there’s always the chance Stefan and Jake were triplets! But even if they were, that theoretical third brother’s chances of surviving seem pretty slim right now…

Take a look at our photo gallery of all of Stefano’s many, many offspring — living and dead!

Days of Our Lives Recap: Rex is Sarah’s Alibi For Abigail’s Murder — and...