Days of Our Lives Recap: Will Xander/Sarah Get Married? Johnny Proposes to Chanel.

At the Kiriakis mansion, Jada announces she needs to bring Sarah to the station regarding Abigail’s murder. When Maggie, Xander, and Sarah all protest, Jada explains they have an eyewitness who puts her at the scene of the crime. Xander insists she had no reason to be there and was nowhere near the mansion night, but Sarah declares that’s not true. She admits that Marlena suggested she seek out Abigail to talk about their shared experience.

More: 57 years of Days weddings that did happen 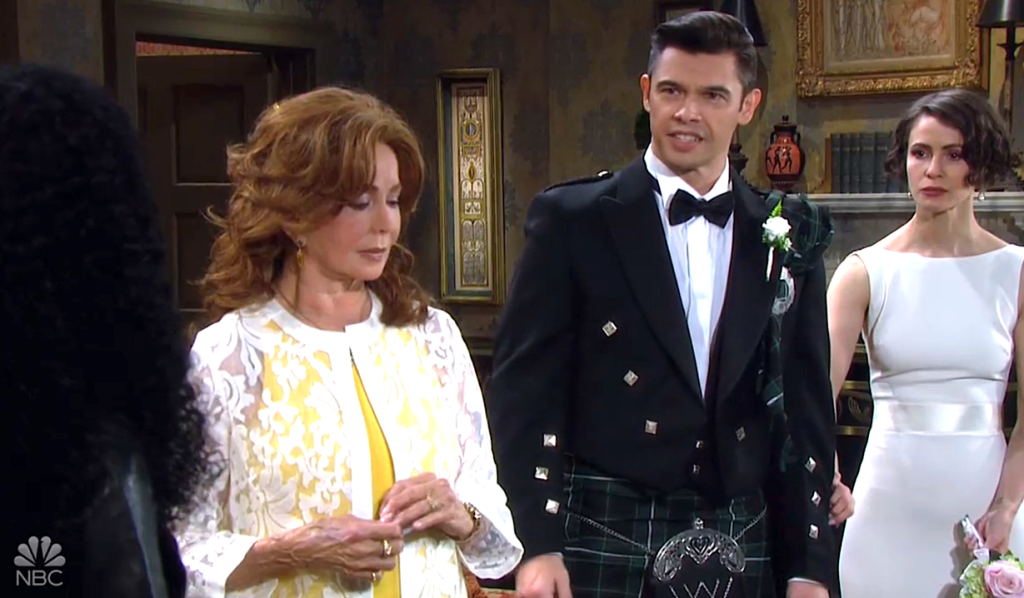 Jada asks if she went to see her that night. Sarah remembers wanting to talk to Abigail, not actually seeing her. Xander asks Jada to leave so they can finish their wedding and then Sarah will answer her questions. Jada asks if that’s what Sarah wants. Sarah tearfully tells Xander she can’t do this right now. She needs to do everything she can to help. She has nothing to hide. Xander asks Jada for a moment alone.

Maggie walks the detective out, as Xander assures Sarah she didn’t hurt Abigail. But Sarah doesn’t remember what did happen. What if she thought Abigail was Kristen and she murdered her?

More: The groundwork is laid for Beyond Salem 3

Rafe calls Chad from the station about bringing a new suspect in. However, he won’t allow him to come there. Chad at least needs to know who it is. Rafe can’t tell him that. Chad wonders how he’s supposed to stay calm through tall this, as Sonny enters the DiMera mansion. He vows to keep him company until they get more information. Not knowing what to do with his anger and guilt, Chad paces. When Sonny wonders why he feels guilty, Chad explains he knew Lucas was the kidnapper and helped send EJ to prison. Now, EJ wants his DiMera shares and Chad doesn’t even care about them. Because EJ was right, if Lucas killed Abby, he could have prevented it by telling the truth.

More: Days alum is game for a vengeful return

Sonny tries to reassure Chad, who feels like he’s failing as a father. Sonny tells Chad to call him the next time he feels that way. If he needs help with anything, he’s there no matter what. Sonny pours them a drink and Chad thinks he hears a car in the driveway, but Sonny doesn’t hear anything. Chad says it happens all the time. He’ll hear something, and for a moment he thinks it’s “her” and she’ll walk into the room and light it up with her smile. Every morning before he opens his eyes, he thinks she’ll be next to him. But she’s not at the door or in bed and she never will be. He sobs over feeling so lost. Sonny holds him as he cries.

In the interrogation room, Lucas thanks Marlena for helping him remember. Especially after what he did to Sami. He’s so sorry, but he hopes Sarah can clear him of killing Abigail. 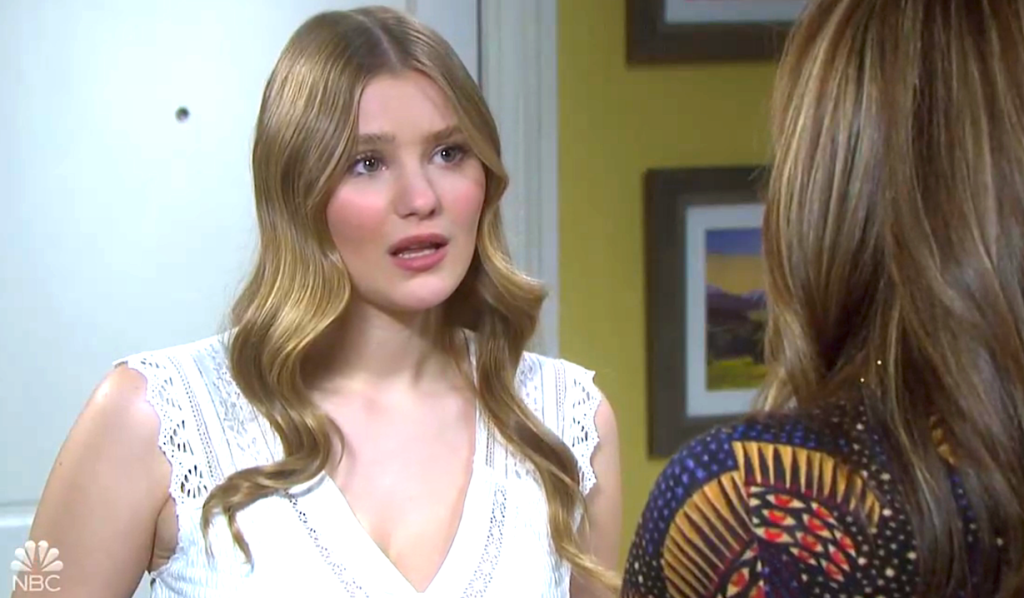 After Allie hangs up with Tripp, who called to check on her, Kate stops by the apartment. As they debate Lucas’s guilt in Abigail’s murder, Kate says there’s something she needs to tell her. However, Marlena arrive to, per his request, tell them what Lucas remembered. When she’s finished, Kate confesses to Allie she knew Lucas kidnapped her mother. When she learns Roman wants nothing to do with Kate any longer, Allie says, “Good. Neither do I.” She asks Marlena to watch Henry and orders Kate to stay away from her son, before storming out.

Kate laments Allie hating her and Lucas, but Marlena doesn’t think she should give up on her just yet. Kate knows she can’t be there for her, but she’s grateful she’s surrounded by other people who care for her.

After Marlena has left, Rafe records his interrogation of Lucas, who recounts seeing a panicked Sarah run to the DiMera door. He saw her drop something and then shove it into her pocket, but he doesn’t know what it was. Rafe asks if he saw Abigail after that. Lucas excitedly says he remembers everything now. He wrapped his bleeding hand and then stumbled back to the Salem Inn. This means… he didn’t kill Abigail.

Johnny comes to Horton Square to see Chanel. He doesn’t want what happened to his parents to happen to them. He recalls how happy they were before the devil. Nothing’s changed for him. His feelings are just as strong. He pulls out a ring box. 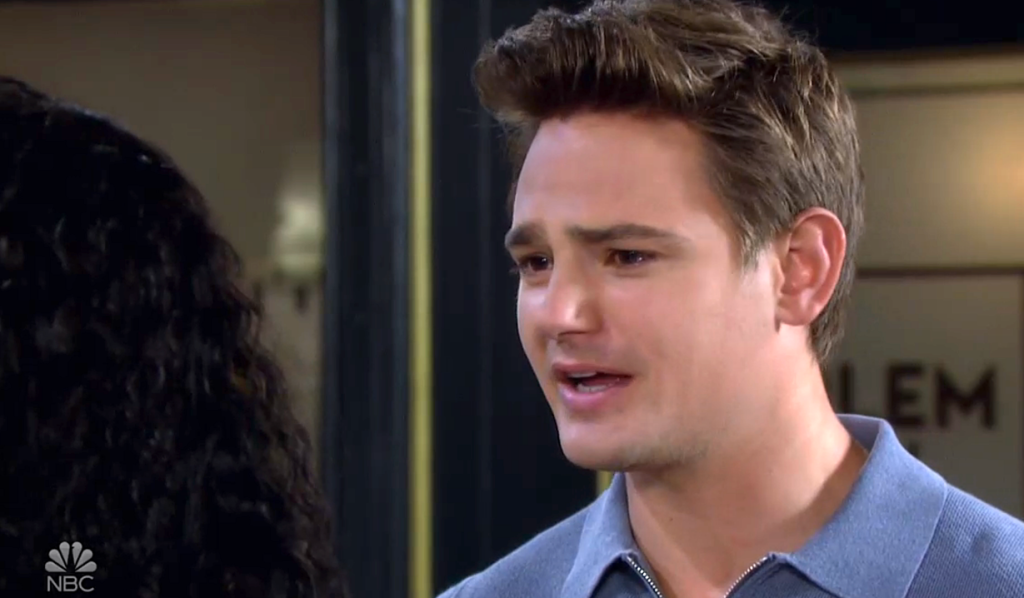 More: Catch the musical men of Salem on tour

Chanel opens the box to her engagement ring. She tears up wondering why he’s doing this. He’s supposed to be respecting her wishes to for space. Johnny can’t pretend he’s not still in love with her. He tried to wait, but after what happened with Chad and Abigail and his parents, he can’t let another day go by without telling her how he feels. They belong together, and they can’t lose any more time. He gets on one knee and asks her to marry him. Chanel pulls him to his feet, reminding him so much has happened since they got married. He knows, but he loves her. He stands close to her and says, “I know you love me.” Chanel admits she loves him too and they passionately kiss. Allie walks up and sees them.

Next on Days of Our Lives: Paulina has plans for Abe, and Allie is unhappy with what she walks in on.

Could Abigail actually be alive? It’s always a possibility on Days, and we know a few actresses who could step into the role. See if you agree with our suggestions in the photo gallery below.

B&B Spoilers: Jail Or Psych Ward, Where Does Thomas Belong?