Confronted in Chancellor Park by Nikki, Michael, Summer, and Kyle, Ashland insists he only wanted a moment alone with his son to say goodbye. He thinks he deserves that. Nikki thinks the only thing he deserves is a jail cell. As Locke bickers with Michael and blames Diane for setting him up, a cop arrives after getting the call. Locke asks Kyle to distract Harrison so he won’t have to watch this and leaves voluntarily with the cop. Michael chuckles to himself and smugly tells Nikki that Diane did the right thing. Nikki grudgingly concedes this. Diane claims she was only in the right place at right time but hopes this shows she’s one of the good guys. One act isn’t winning Nikki over. 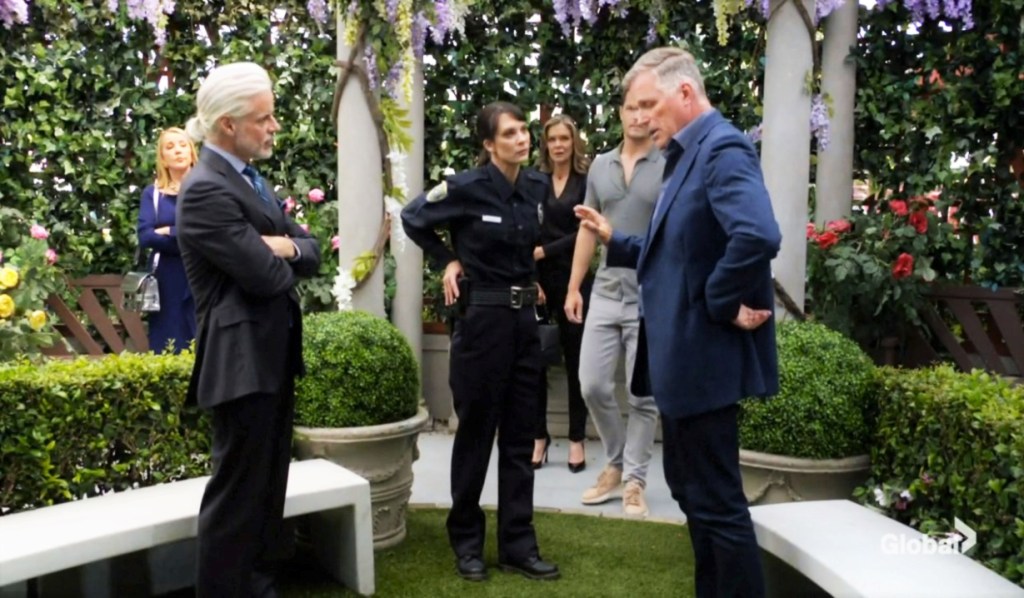 When they are left alone, Michael tells Nikki that they got lucky. She refuses to accept that Diane did anything good. She had motives. Regardless of all that, the good thing is that Ashland could be in a cell. The lawyer points out it was only a misdemeanor and he’ll likely be out in a few hours. Hopefully, this will nudge him out of town.

In the CEO office at Newman, Victoria informs Nick and Victor that Adam made his pitch to keep Sally in her position and added that he broke up with her. They squint at that last detail and suspect that this is a bluff. She doesn’t have a lot of time to test Sally and will have to make a decision about her future fast. Either way, Adam has made it clear he’s not planning to return. Nick notes his brother is the wild card once again. Victor is disappointed. He was willing to mediate between the children. His daughter makes it clear that she didn’t try to change Adam’s mind because she thought it wouldn’t have been good for the company. Victor doesn’t see any point in keeping Sally around if she’s not giving them leverage on Adam. They suspect she’d be overwhelmed without Adam around and Victoria will make a choice about her today. 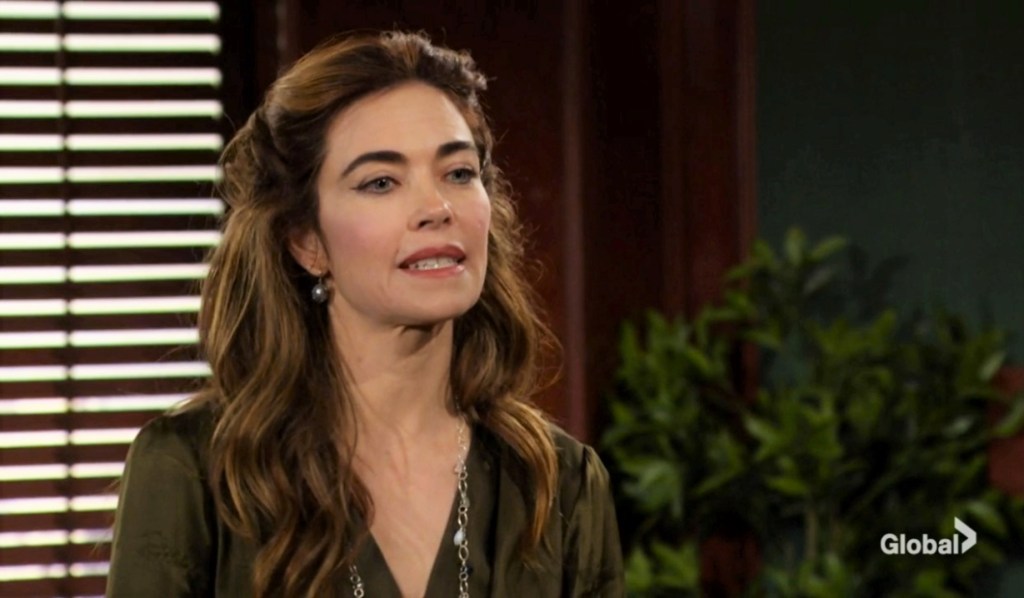 Nikki bustles in and announces she just watched Ashland being arrested. Victoria notices her father isn’t surprised. He admits he asked Michael to “be vigilant” and is surprised that Diane helped out. Nikki insists that Diane was just exploiting this to make it look like she’s a decent human being. Victor doesn’t care how all this happened as long as Locke is paying for his actions.

In Sally’s office, she makes a desperate call to Adam but he’s not responding. Chloe arrives and the redhead explains that he sent a text saying he was heading to Chicago and then disappeared last night. She can’t understand what is happening. Chloe suggests that he could be preparing for a rampage but Sally says he’s assured her he wouldn’t do that. Chloe doesn’t think that she should take Adam at his word. The redhead worries that he might be launching some revenge plan as they speak. Chloe assumes the job offer is gone but Sally says it’s still on the table as long as she’s in charge. After Chloe tells her that she needs a job right now because her partnership with Chelsea has been dissolved, they prepare to dig in. Suddenly, Sally gets a text about a press conference and says they will have to hold off. Their jobs might not exist for much longer. 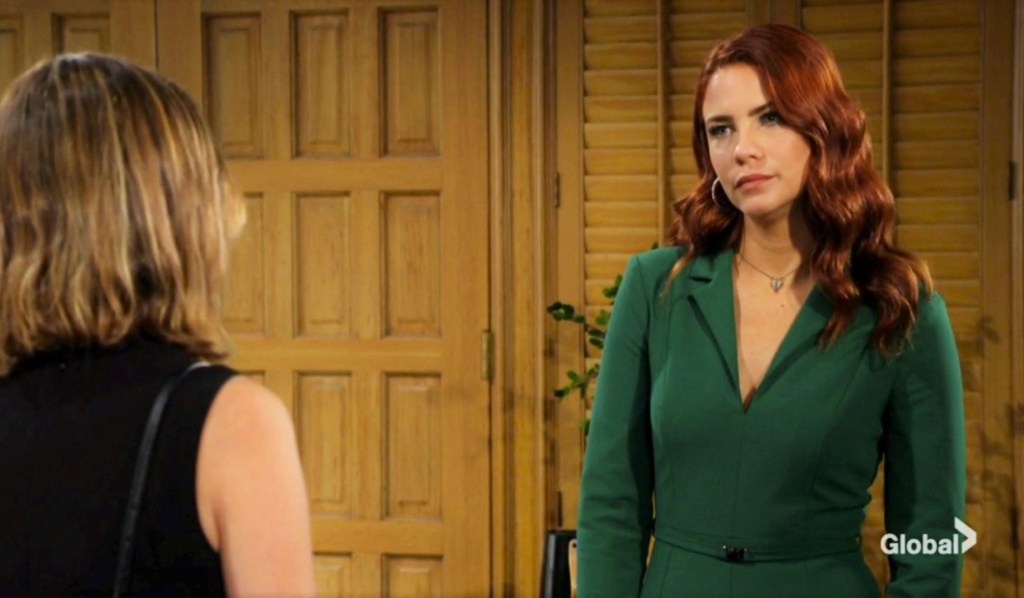 They tune in to the press conference, where Victor announces the new team leading the company. Victoria says they are looking forward to the new era for Newman Enterprises. She makes it clear that Adam won’t be part of this. Sally talks at the screen until Chloe gets her to dial it back. A reporter asks Victoria if Sally will retain her position at Newman Media. Victoria doesn’t answer directly, explaining “staff realignments” are under consideration. Sally shuts down her computer and paces. This doesn’t sound good. 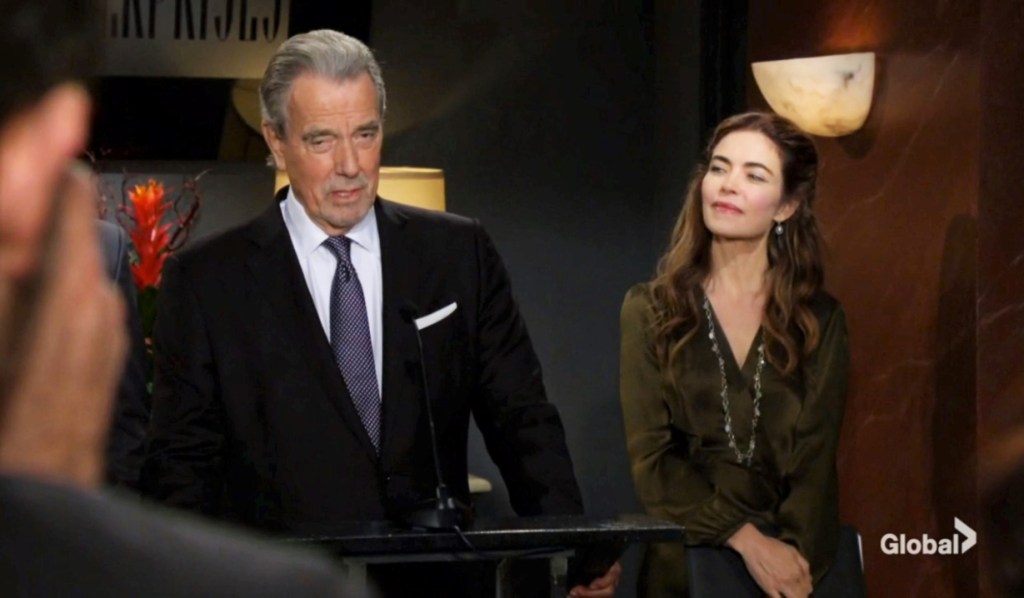 Back in the CEO office, Victoria’s family tell her that she was terrific. She’s sure they have convinced the business community they are stronger than ever. She’s glad to be moving forward with them by her side. Nick is sure there is nothing but blue skies ahead. They notice Victor has disappeared.

More: A tribute to OLTL

Noah brings mock mojitos to Tessa and Mariah by the pool at Dive Bar. They tell him they were at the doctor’s to get a second opinion on Tessa’s vocal nodules. The news wasn’t good. It was the same diagnosis. She needs surgery and is getting it tomorrow. Mariah insists they be very, very, positive. Noah is hopeful that everything will be fine. Allie joins them and they talk about her first day at Jabot, which she loves. Noah gets a text about New Hope and Allie asks if he’s spoken to his dad about his plans. She apologizes for letting that slip out. Noah says it’s okay and tells the group that he’s thinking of leaving the non-profit. He’s not sure about the timing because Nick has returned to Newman. He admires the organization, but it’s not really his thing. The ladies think he should “find his bliss.” He doesn’t want to leave his father high and dry. 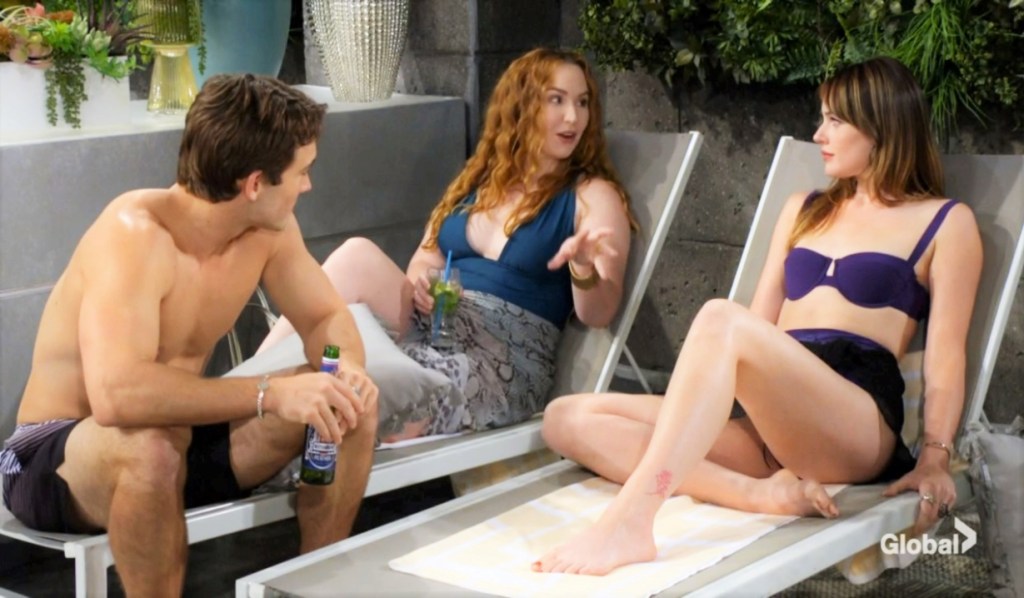 After Noah fetches them more drinks, he explains he will tell his father he’s moving on after he’s had some time to settle in at Newman. They wonder what’s next for him. He had a great time planning their wedding so he wants to start a club. It could be the coolest place in town. Tessa is thrilled to see him so happy. Mariah calls for a round of celebratory drinks and goes off to get them with Allie. Tessa asks him if there is potential with Allie. He says they had a date and it was fun. He feels good around her.

At the bar, Mariah and Allie talk about how complicated things are at the Abbotts. She’s wary of Diane. Mariah urges her to stick with the core Abbotts… and Noah too. He’s a good guy. They return to the others and toast to Tessa’s surgery, Noah’s plans, and first dates.

Diane is at the Abbott estate with Summer. Harrison is eating animal crackers in the kitchen. They are sure Harrison was too distracted by ducks to understand what happened with Ashland. Diane feels thrown by the whole incident. Kyle worries that Locke could still whisk his son away and disappear. He assures his mother that everything is okay but she wonders if he’s angry with her. Kyle is confused. Diane explains that she didn’t collude with Locke, but she did let him get close to Harrison for a couple of moments. He asks her not to beat herself up about it. Diane wonders if she should have contacted her son rather than Michael. Summer tells her she handled this correctly and Kyle agrees. He’s grateful to her for coming through for them. 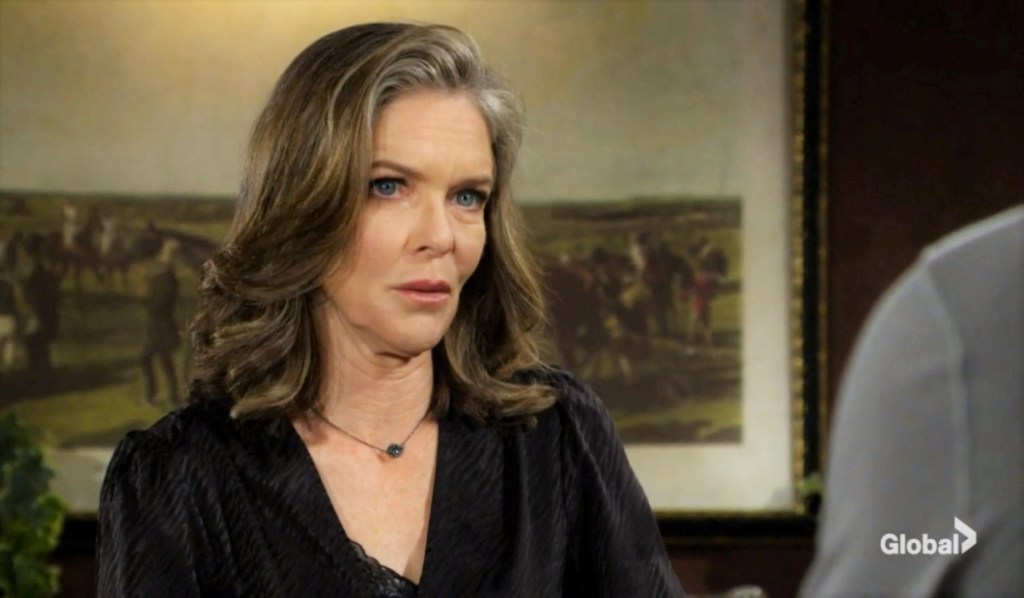 Ashland is shown to his cell, and rants at the guard about harassment. After a while, Victor drops in to see him. He tells Locke that this is where he belongs. Ashland says his lawyers will have him out any second. The Newman warns that he will stay there if he takes another step toward the boy. Locke says using the child as a pawn is despicable. The Mustache doesn’t appreciate his hypocritical righteousness and says Ashland deserves everything he’s getting. When Locke tells Victor he’s the one who deserves to suffer, Victor asks if that’s a threat. Ashland invites him to take it anyway he likes. Victor grabs Locke by the lapels and bellows that no one breaks his daughter’s heart and gets away with it. “I’ll follow you wherever you go!” he vows before walking out.

Next on The Young and the Restless: Phyllis plots her revenge.

Look back on Tessa and Mariah’s wedding in the gallery below.

Miss today’s episode? Catch up via Paramount Plus.