Days of Our Lives Recap: Chad Confesses to EJ About Setting Him Up — and Xander Wants to Marry Sarah.

Sonny returns from Sweet Bits to Will who is still in bed. Sonny shows him the article about Lucas’s arrest. Will can’t believe his father could have killed Abigail. When Sonny defends him, Will points to them rolling up Leo in a carpet as evidence anyone can turn to violence when they’re operating out of fear. Sonny thinks it’s different. Will says it’s all speculation anyway since Lucas doesn’t remember.

Will asks his husband to distract him from all this. Sonny gives him a scone and iced coffee. When Sonny remarks he’s getting crumbs all over the bed, Will leans back and asks him to help him with that. Sonny obliges and kisses his chest.

As Will and Sonny cuddle after sex, Will gets a text message. The streaming service he previously wrote for wants another series from him, but he has to go to Los Angeles. He doesn’t think he can leave, but Sonny encourages him to go for it.

In the interrogation room, JJ demands to know if Lucas killed Abigail. Lucas tears up admitting he doesn’t know. JJ wonders why he looks so guilty then. Lucas shouts that he feels shame and hates himself for everything he’s done. JJ grabs him and raises his fist, threatening to beat the truth out of him. Jennifer enters and orders JJ to stop.

JJ lets go of Lucas, and Jennifer promises her son they’ll get answers. JJ leaves. Lucas offers to let Jennifer yell and hit him too. Jennifer would never hit him. She loves him. He thinks deserves everything that’s coming to him. Jennifer knows he loved Abigail and that he didn’t kill her, but she wishes he would have told her he feared he hurt her. Lucas says he could barely tell himself that he could have taken Abigail away.

More: Was this Days’ most shocking recast of all time?

At home, Marlena lashes out at Kate for keeping quiet about Lucas kidnapping Sami and letting EJ take the fall. Kate rolls her eyes over EJ, who isn’t exactly innocent. As for Sami, she’s no one’s victim. She knows Lucas made a mistake, but she doesn’t think he deserves to go to prison. Marlena asks why she’s there. Kate wants her to help Lucas. If not for him, then to help get justice for Abigail.

Marlena comes to see Lucas to hypnotize him, but she makes it clear she’s not doing it for him. Nothing discussed there will end up in court, but they need to find the truth. Lucas needs to know if he did this.

In the DiMera living room, EJ talks to Stefano’s portrait about all he’s lost when it comes to family. He laments not hearing from Chad in days, as his brother walks in. Chad apologizes for blaming him for Abigail’s death and EJ apologizes for not telling him about Clyde. EJ vows to help his brother get justice, whatever it takes. 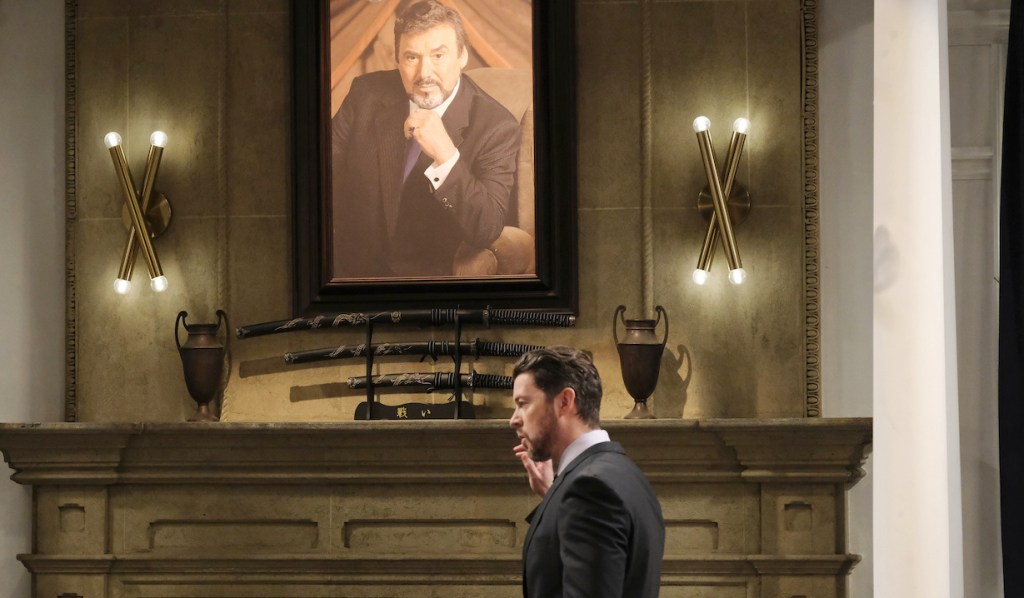 When EJ moves on to ranting about Kate’s treachery, Chad confesses he also knew he was innocent. He knows it was wrong, but he was so angry at him. He planned to come clean, but then he thought he saw him force himself on Abigail. He just wanted to punish him. Chad hopes he can find a way to forgive him. EJ calmly says he has to give the matter careful consideration since Chad’s betrayal cost him Samantha. He notes Chad keeping quiet about Lucas’ crimes may very well have cost Abigail her life.

EJ later returns to the living room to find Kate with Chad. He’s decided how they can make restitution. If they wish to remain out of prison, they have to sign over their DiMera shares to him. 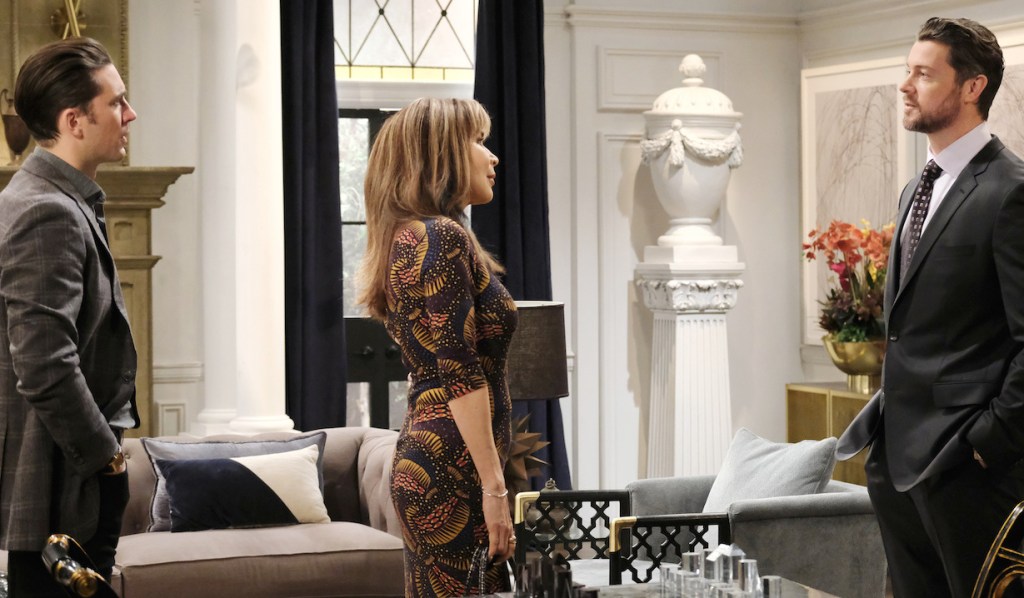 In their Salem Inn room, Xander comes out from the shower in a towel, disappointed Sarah’s already dressed. They kiss, and she removes his towel. They fall to the bed.

After sex, they get dressed and kiss on each other until Sarah breaks it off. She has to pick up her prescription refill. They remark on the new dosage helping, but Sarah doesn’t think she’s out of the woods yet. She is grateful that she didn’t hurt anyone while hallucinating and hopes their lives can return to normal. Xander wishes the same were true for his best mate. She suggests he go check on Jack.

At the Horton House, Xander tells Jack he’s sorry he didn’t approach him at the funeral, but he didn’t want to intrude on the family. He offers his condolences and hopes Jack knows he’s there for him. Jack does and asks about him and Sarah. Xander notes they’re still working through her ordeal, but he knows how lucky he is to have another chance with the woman he loves.

More: What worked, what didn’t on Beyond Salem 2 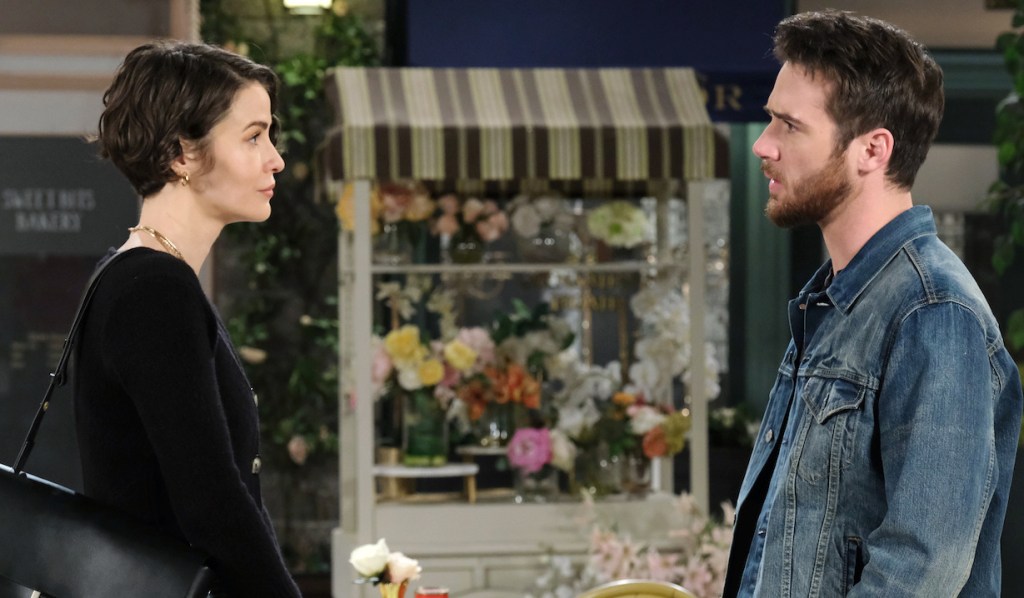 Holding a white paper bag, Sarah runs into JJ in the Square. She didn’t get a chance to talk to him at the funeral and tells him how sorry she is about Abigail. He tells her he just saw Lucas who can’t remember if he hurt his sister or not. He asks how she is doing after being injected with the same drug as Abigail. She says she’s better, but admits to her hallucinations of seeing Kristen and wanting to kill her. She explains Marlena suggested she talk to Abigail about being drugged. Maybe if she had, she could have stopped the killer. JJ points out she could have been killed too. If it wasn’t Lucas, who did it, god help the person who did it.

Next on Days of Our Lives: the SPD gets a new recruit, and Xander’s got marriage on the brain.

EJ maybe have been wronged in this instance, but he’s no angel. Look at the photo gallery below for some of his more nefarious crimes.

Home and Away star Dan Ewing welcomes a baby girl with his fiancée Kat...

Home and Away’s Cash unlikely to survive: ‘Dark and emotional’