As we get in Salem, Will is telling Chad about Lucas’ bender. Chad wants to know why Lucas started drinking again but doesn’t buy the “feeling guilty over a ski accident story.” Will then admits he always thought Sami and EJ would end up together. They bond a bit over Abigail’s memory and Will says he and Sonny will always be there for Chad. 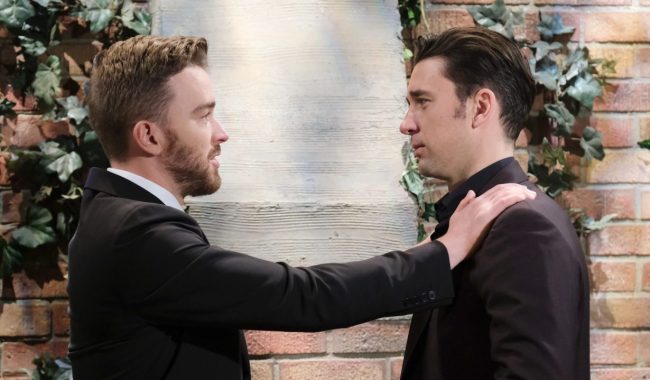 Chad starts going through photos of Abigail on his phone when Rafe calls with news. They found footage proving that Clyde had an alibi. Chad refuses to believe it at first, but finally gives in. He starts pacing and pondering who could have killed his wife. After a few flashbacks, he thinks about Lucas’ wound, the blood at the scene, the falling off the wagon… and decides that Abigail’s uncle is the true murderer.

At Marlena’s Eric scoffs at the idea of a wedding going off without a hitch before she asks him about Nicole and Rafe. Eric insists that he only wants happiness for her and says he’s the one who screwed things up, so if Rafe can give her the happiness he didn’t, then great. 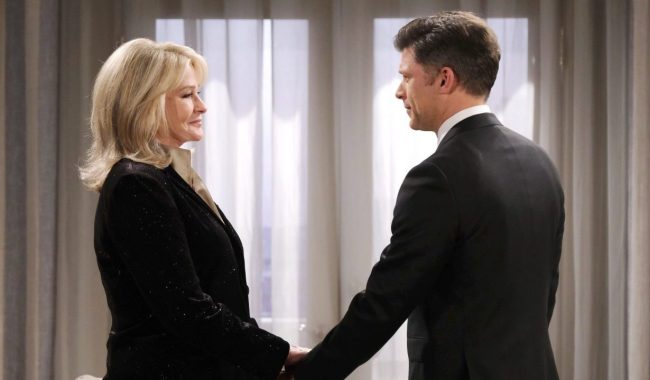 Lucas, meanwhile, is rehashing the whole drunken bender/kidnapping Sami thing with Kate before saying he’s absolutely certain that Clyde was the one to kill Abigail. She’s relieved and tells him he’s a terrible liar — in a good way. But she still wants him to be sure he wants to marry Sami without coming clean.

He forcefully insists he is, and Kate says fine, but Sami will figure it out on her own. Lucas insists kidnapping Sami was “intervention” for an addict in a toxic relationship. Kate admits that Sami’s lived by “the ends justify the means” plenty, so she should give him a pass.

Outside of the pub, Sami walks up as EJ admits to Nicole that he and Belle have already slept together. Nicole keeps the news to herself as Sami scoffs at having ever loved EJ, then tells Nicole that Rafe is “slumming it” with her. EJ accuses her of being a cheater and tells Sami to “check Lucas’ luggage for chloroform” before tying the knot. Roman walks out just as things get extra heated and Sami storms off with him. 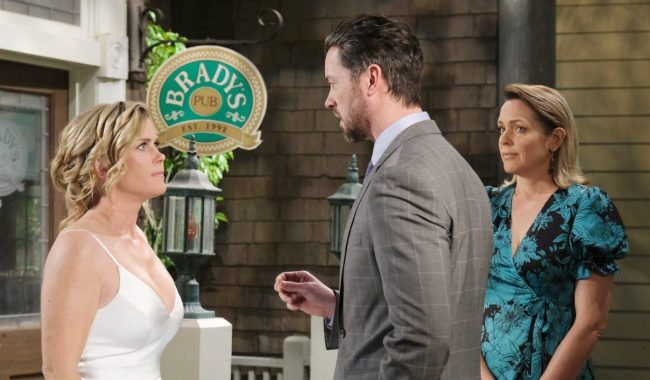 At the church, Roman admits that he’s worried about what he walked in on. “It’s hard for me to tell when you and EJ are going to slit each other’s throat or go in for a kiss.” She yells at him and says she couldn’t be happier, but Roman says he can still tell Lucas it’s off.

Johnny and Allie, meanwhile, are sniping at each other as they set up for the wedding. Allie insists that she and Chanel have more in common and “get each other,” so they’re going to end up together. Johnny warns her that he plays for keeps — he’s taking Chanel away. Marlena and Eric walk in as they’re fighting and decide they’re just going to leave the twins to it.

They’ve calmed down by the time Will shows up, just in time for Sami to walk down the aisle. Eric begins the ceremony with the classic scripture “Love is patient…” As Lucas and Sami get emotional, Eric suddenly has a flash to an image of him performing a ceremony between Nicole and Rafe. “Nicole” cuts in to say to marry them already, then Eric’s brought back to the present and realizes Sami is talking. When he asks for objections, though, Lucas locks eyes with Kate. 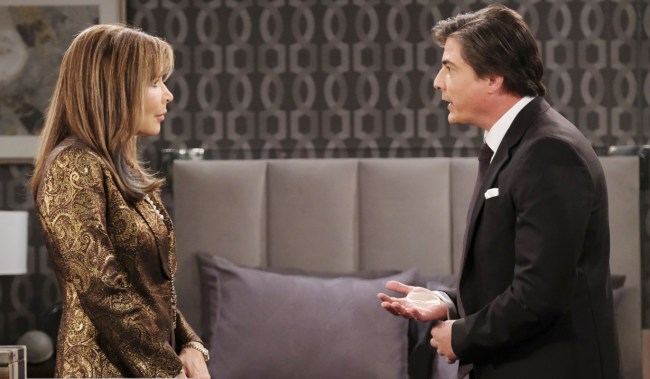 She keeps quiet and the bride and groom exchange vows. Sami talks about her kidnapping ordeal and thanks her not-so-soon-to-be husband for saving her “like something out of a fairytale.” He’s saved her so many times — including from Kate. And herself. Lucas is so moved, he vows that he’s going to live up to every word she said about him, even though he hasn’t lived up to it so far.

At the pub, EJ and Nicole chat about Belle and Sami. Nicole wonders if he’s just hiding sleeping with Belle because he doesn’t want a fight… or because he doesn’t want to blow his chances with Sami down the line. His love for her is so dead, he insists, even Rolf can’t bring it back. Nicole scoffs, and he throws Eric back in her face in return. She wanted Rafe because he was with Ava and she always wants what she can’t have. Now she has him, and no matter how much he pines, Eric will never break up her marriage to. 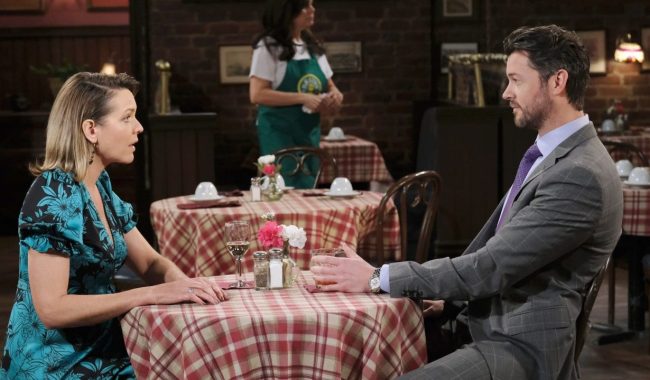 They part ways, both upset, but then Rafe shows up to surprise Nicole. He fills her in on Clyde and telling Chad, wondering who really killed Abigail. Back at the DiMera mansion, a clearly upset EJ drinks to the thought of Sami being out of his life, permanently.

In the show’s last few moments, Lucas and Sami exchange rings and “I do’s.” Chad bursts in before Eric can declare them man and wife and grabs Lucas by the collar, demanding to know if he murdered Abigail. When the wedding party pulls them apart and wonders why in the world Lucas would want to kill Abby, Chad says it’s because he found out Lucas’ “dirty little secret.” That he was the one who kidnapped Sami!

Next on Days of Our Lives: The truth is finally out there!

Get a look at our photo recap of Beyond Salem Chapter 2, Episode 2 below!

Young and Restless: Victoria Reels When Ashland Appears in Her Office

Home and Away Star: Sharni Vinson cuts a casual figure as she enjoys a...